Features Articles
“In the cloud” gets literal at York U 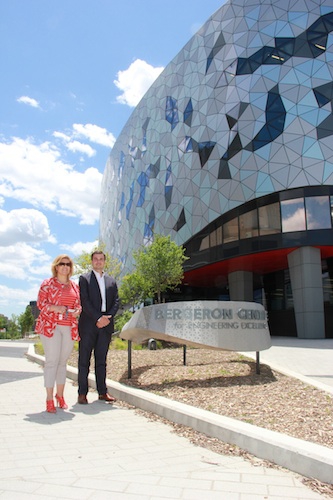 August 10, 2016 – York University’s Bergeron Centre rises up in the middle of the Toronto campus, its mathematical Penrose pattern of metal, dichromatic triangles and triangular windows glinting in the sun. It doesn’t follow any particular shape, seeming to hover above its geometrically groomed landscape, scoping out the nearby pond.

Not bad for a structure that was supposed to model a cloud.

Part of the Lassonde School of Engineering, the Bergeron is the “first building of its kind purely for engineers,” says Svetan Veliov, the senior electrical engineer with Arup, the design and consulting firm involved in the 169,500-sf project.

The building was designed by Toronto’s ZAS Architects+Interiors and built by UK-based construction firm Laing O’Rourke, in partnership with Gillam Group. Symtech Innovations Ltd. (Markham, Ont.) was selected as the design-assist electrical contractor and was responsible for installing systems like the lighting, security, fire alarm, power distribution, integrated cabling and emergency backup.

The $113-million, five-storey centre is home to civil, mechanical and electrical engineering students and was completed on time in September 2015 after just 19 months of construction. The school celebrated its official grand opening this past spring.

“The building wasn’t built for 2017; it was built for 2050,” Veliov notes. He’s referring to the intricate web of systems and data cabling within the walls and floors.

There is about 300 km of copper cabling, and more than half of that is just data, he says.

“Having that much data, that’s new to me. There’s a lot of blue cable here.”

The entire project was developed using BIM (building information modelling) with Revit software, meaning it followed a virtual prototype, or 3-D model, embedded with information such as water pump pressure, materials, costs and job schedules. Symtech then took this model and updated it as information changed (e.g. receptacles changed locations) during the construction stage.

Many of the pipes, cables and systems in the ceiling are left exposed and clearly labelled to encourage questions and cultivate learning for the students, Veliov adds.

“The vision York had was that students would be able to walk around with an iPad, point it at a spot on the wall, and see what is going on behind it in 3-D and real-time through our BIM model,” he says.

“The idea was that students can play with and develop it, too,” Veliov says. “Revit and BIM is a huge part of engineering and it’s still somewhat new—I’ve only been around it for five years and we see it becoming more and more automated.”

“I’d like to say it’s a building that revolves around electrical engineering,” Veliov says, simply because of the hundreds—if not thousands—of pieces of equipment that need power.

“This isn’t just any equipment; this is high-powered stuff. Some of it hasn’t even been made and the university hasn’t even procured it yet. So planning to connect this equipment to a power source was a challenge.” An example of this is the CNC machine in the school’s Mechanical Workshop area.

Moreover, staff wanted to be able to move and use these high-tech tools in different rooms. The solution was installing receptacles in a way to make them adaptable—plug-n-play—so “you can’t make the mistake of taking a wave generator and plugging it into a toaster outlet”.

About 30-40 different types of outlets were installed, like 347V, 208V and 600V. “I think we used every single type of plug they manufacture in this building,” Veliov says.

High-power receptacles that can be multiplied are popular as well, as the school brought in furniture with power bars and data connections already built in. So while there are 4000 outlets built into the centre, there are actually way more.

Bergeron’s humming electrical room stands out in that, unlike many others we’ve seen, there is a large amount of unoccupied space.

“It’s because we’re already thinking ahead to when we expand,” explains Irina Arsene, the construction project manager with York’s facilities department, noting a Site B is about to start the planning process.

“This empty space will be able to fit an entire duplicate of the switchgear [from Schneider Electric] that’s already here,” Veliov adds. “Then, if you lose one side, you have a backup, too.”

Utility tunnels run throughout the entire campus, which is fed by Toronto Hydro through its Keele and Steeles substations. Two high-voltage feeders service the Bergeron Centre from a sub-substation outside Scott Library, which is right next door. Steam from heat generated on campus also travels through the tunnels, which all connect back to an control centre where devices, like breakers, can be remotely controlled. The power factor correction device essentially cleans up the power, Veliov says. “That means if you do have a line loss, this rectifies it, so the building won’t see dips in power.”

The electrical room also features a transformer with a 2000A capacity that takes the power from 13,000V down to 600V.

The day EBMag visited, the building was running at 270A. Occupancy levels were low because school was out, but it was still a hot summer day.

“It’s very cool and looks good but it does so much more,” Veliov adds. “You don’t have the sun heating up your roof and going through the insulation. When it rains, it retains water, which further cools the roof. Plus, in the winter, it acts as insulation to reduce the heating load.”

All stormwater is collected in three retention ponds, which slowly leeches into the ground, Arsene adds.

Additionally, Veliov says all motors are energy efficient and over half boast VFDs, helping them play well into the building automation demand-response system.

The automation system was designed by Arup but put together by Johnson Controls, and consists of motion and carbon sensors, and more.

“We walk into a room and the system knows we’re here, so it increases its fresh air intake,” Veliov says. “When you leave a room, the system won’t bring in as much fresh air. But it brings in just enough so that next time someone walks in, it’s not stuffy. It does that by a scheduling feature.”

Taking in fresh air requires a lot of energy, as it needs to be either cooled or heated to 22C at low humidity, he continues. Air-side economizers are “the key to recovering over 50% of the energy that we spit out of the building,” taking the heat or cold from the air going out and transferring it to the air coming in.

And, of course, lighting and IoT (Internet of Things) also has a role to play when it comes to efficiency.

Lighting up the cloud

Skylights—about 2 to 3 metres deep—bring natural light into the underground Mechanical Workshop, which is known as “The Rock”—a nod to the architectural dream of the Bergeron Centre looking like a cloud floating over the rock of Georgian Bay.

LEDs and T5s make up the lighting technologies. All exterior and high-priority areas are LEDs, Veliov says, and T5HOs are predominantly used in the classrooms/learning labs.

But it’s the lighting control system that keeps the smiles on energy usage.

“We wanted to do a lighting control system like we’ve never done before,” Veliov says.

The system is 100% self-adapting, controls itself, and conforms to ASHRAE 90.1.

“If you walk into the office during the day, the lights won’t turn on. You have to use the switch, and then they turn on 50%. If that’s not enough, touch the switch again to get 100%. 15 minutes after you leave, the lights drop to 50%. Ten minutes after that, they go off.”

In the labs, a Lutron lighting system connects with a Crestron AV system in the cloud, controlled by an iPad. It’s important to note Bergeron has no traditional lecture halls, meaning students can watch lectures online anywhere at any time.

Everything’s on occupancy sensors after-hours; there is no continuous nightlighting, and the corridors only light up when someone is there, Veliov notes. However, the fire alarm—which is also connected to the PA system—automatically turns on every one of these corridor lights when triggered.

“Our biggest lesson was remembering who we were designing for,” Veliov says. “We got into this rhythm where we were designing for the client but, in the end, we weren’t designing [Bergeron Centre] for the faculty and school; it’s for the students. And as soon as that clicked, it was much easier to pitch what would yield better results for students.”

It was also a project that sparked more input from the younger electrical engineers on the team. They were the ones who recognized some of the newer equipment the school would want connected, Veliov notes, so they knew what power it needed and could suggest ideal locations.

* This article also appears in Electrical Business Magazine. Check out our ARCHIVE page for back issues.

Svetan Veliov, the senior electrical engineer with Arup, and Irina Arsene with York University show off the Bergeron Centre in Toronto.