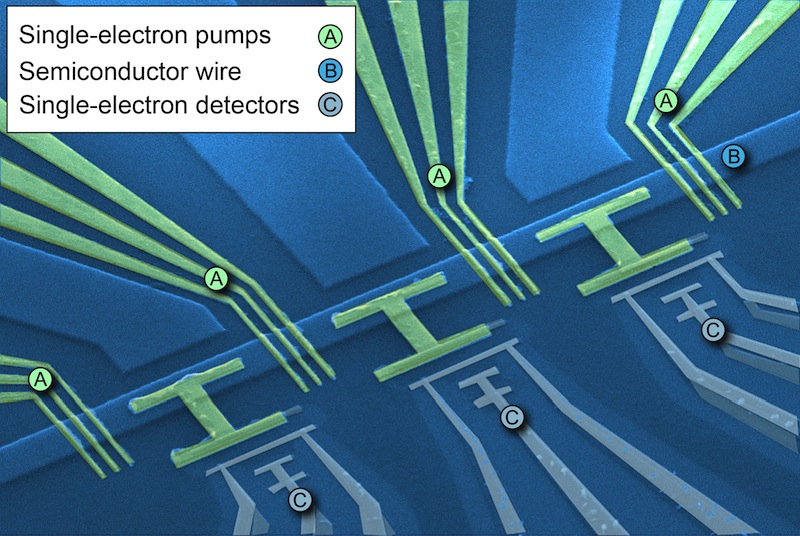 March 31, 2014 – Quantum standards for the electrical units volt (V) and ohm (Ω) have been available for more than two decades, say researchers at the Physikalisch-Technische Bundesanstalt (PTB) but, apparently, not so much for the electrical base unit of the international system of units’ (SI) ampere (A).

In time for critical (maybe) decisions on changes to the SI at the Conférence Internationale des Poids et Mesures in November, a group of PTB scientists say they have developed a current standard that not only generates a clocked single-electron current, but simultaneously measures this current independently.

Within the planned SI, the base unit of current will then be traced to the corresponding fundamental constant: the electric charge of a single electron. (In the ‘New SI’, four of the SI base units—kilogram, ampere, kelvin and mole—will be redefined.)

The ampere has for long been a problematic unit, say the folks at PTB: in spite of its being a base unit—thus a basis for all electric measurements—it can only indirectly be realized in a metrologically accurate way via the derived electric units V and Ω. Those two units, meantime, can be accurately realized on the basis of fundamental constants: Josephson (for the volt) and von Klitzing (for the ohm).

Scientists worldwide have been trying to do the same with the ampere, says PTB, with the appropriate fundamental constant being the charge of a single electron. A quantum standard for the ampere could, in principle, be realized by controlling the capturing and emission of single electrons in an electronic nano-circuit. The circuit could then serve as a so-called ‘single-electron pump’. Only recently, however, scientists from PTB have developed an optimized single-electron pump allowing both the generation of a clocked single-electron current and its independent measurement with minimum uncertainty.

For this advance, the scientists under Hans Werner Schumacher’s lead have been awarded the Hermann von Helmholtz Prize, an international award in the field of metrology (the science of measurement).

PHOTO: This semiconductor structure can measure single electrons and their respective charge. Four ‘single-electron pumps’ are integrated onto the chip; each of them has three gate electrodes (coloured in Green) crossing a semiconductor wire (Blue). The pumped electrons are detected with the aid of three single-electron detectors (Grey).