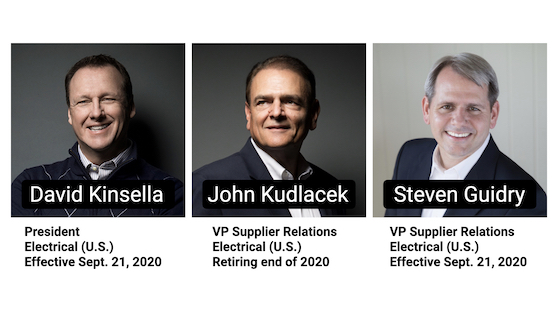 August 27, 2020 – AD has named David Kinsella president of its Electrical (U.S. Division), with the unanimous backing of the Electrical-U.S. board. Dave currently serves as the division’s VP, Member Relations, and will assume his new responsibilities September 21.

Dave will be responsible for member and supplier partner engagement and growth for the division. Prior to joining AD in 2008, Dave served in a variety of leadership capacities in distribution and manufacturing.

John Kudlacek, Electrical (U.S.) Supplier Relations vice-president, has elected to retire as of the end of the year. He joined AD in 2016 after holding marketing and purchasing, operations and product management, and supplier relations roles at an electric supply distributor.