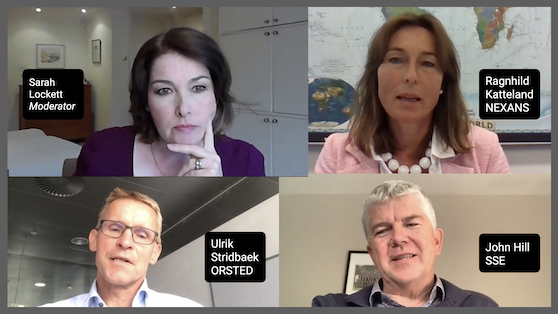 August 27, 2020 – I recently had the pleasure of attending a media roundtable “Global transition to renewable energy” and, after having been shut out of numerous conferences and tradeshows this year, it feels good to have a “conversation” again with industry experts and to hear their global perspectives.

• John Hill, project director, SSE (formerly Scottish and Southern Energy), a generator of renewable electricity in the United Kingdom and Ireland, and among the largest electricity network companies in the U.K.

The panelists were both engaged and engaging, and Lockett did an excellent job of moderating and moving things along. Well done!

But first … what is the difference between offshore wind farms and floating wind farms? After all, both farms are constructed over water (usually an ocean) instead of land.

Offshore wind farms require shallow waters, as they are erected on fixed foundations. These farms, and the methods for constructing them, are mature technologies. They are built 70-100 km from shore, explained Katteland, so there are no appreciable losses between the point of generation to shore.

And the subsea cables used to connect those farms to consumers are even more mature than the turbines.

Katteland explained their subsea cable technology is essentially unchanged since the 1970s. Of course, there have been incremental improvements over the years, she said, but the technology has been solid for decades.

Besides their predictability, offshore wind turbines have also been doubling in capacity roughly every five years, noted Hill. The next-generation turbines will be 15-MW units, further driving down the cost-per-megawatt.

Hill also said upcoming projects will be located even further out to sea—150 kilometres, in fact. “At that point, you move to HVDC [high-voltage direct current] cables.”

“For the bulk supply of cheap renewable energy, offshore wind is a great idea,” said Stridbaek, “But you need to have the resource (an ocean) and shallow waters. A country like Switzerland is rightly not interested.”

Floating wind farms are not tethered by a fixed foundation, which means they could (in theory) be deployed anywhere in the world’s oceans, but they are primarily of interest to those jurisdictions that lack shallow waters.

“California is an important market for floating wind farms because of their deep waters,” Stridbaek noted.

However, and most importantly, floating wind farms are not yet a mature technology.

“We see offshore floating wind as a technology 5-10 years out,” said Hill, who thinks that, by then, the technology may become competitive with fixed offshore wind.

The panelists’ conversation was mainly focused on Europe and the United States, so I asked them about the wind energy market in Canada, and whether our offshore wind energy potential (be it fixed or floating) actually had any potential.

Canada already has a lot of installed onshore windpower, said Stridbaek, approvingly. As for offshore windpower, there have been discussions for both coasts—even the Great Lakes—but nothing major. “Like the Norwegians, Canada is well-positioned because of its generous hydropower, but [offshore wind is] is definitely on the radar.”

Transitioning to an electrified future, and truly reaping the rewards of all these renewable sources in the years to come, means we need a smarter grid, Katteland insisted.

Against the backdrop of a global transition to renewable energy, Lockett asked the closing question: “Do we have enough electricity?”.

“No, we need to build more,” Stridbaek answered without hesitation. “We’re now at the end of the beginning.”