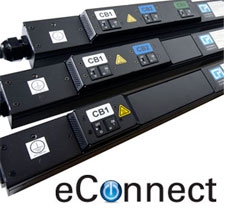 February 27, 2014 – Chatsworth Products (CPI) has expanded its eConnect line of intelligent power distribution units (PDUs) to include high-density PDUs in 50A and 60A 208V that meet power loads of up to 17kW per PDU.

According to the company, the addition addresses the growing industry-wide demand for High Performance Computing (HPC), virtualization and cloud computing. Engineered to withstand the heat loads of any hot aisle environment, eConnect PDUs claim to have the highest ambient temperature rating in the market—149F/65C. The units feature six built-in circuit breakers, PDU linking or IP consolidation up to 20 PDUs, and input line and outlet amperage on local display and web interface.