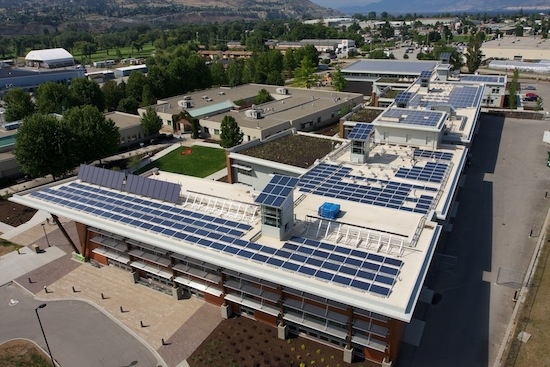 September 14, 2011 – When students in the Centre of Excellence at the Penticton campus of Okanagan College plug in their laptops this fall, they’ll have to look outside to see the source of their energy. Just in time for the new school year, the British Columbia college is debuting its new solar energy system – the largest in Western Canada, it claims.

The 260 kW solar energy system, which uses 1106 Conergy P solar modules on the rooftop of the building, generates about 292,500 kWh per year. Canadian solar EPC contractor, SkyFire Energy, was the project developer.

The hope is that the system will help the Centre of Excellence in Sustainable Building Technologies and Renewable Energy Conservation meet the goal of being energy neutral over the course of an annual operating cycle, said the college.

“In the Okanagan’s sunny summer months, the solar energy system will at times exceed the building’s needs and the energy will be fed into the grid. In the winter, the College will draw from the grid to meet the campus’s energy needs,” it explained.

According to Okanagan College, the system presents a three-fold benefit: it will help the college meet the Living Building Challenge of net-zero energy and water consumption; result in decreased operating costs in terms of energy consumption; and serve as a learning tool for students in the trades and technology classes.

Apprentice and entry-level electricians being trained by the college will also be able to learn how the system functions, monitor energy production, and see how the system integrates into the rest of the building’s infrastructure and with the municipal power grid.

With a climate and rooftop “ideally suited” for solar energy, the decision to deploy solar energy at the campus was an easy one, said Okanagan College.

“Even as we were planning and building the Centre of Excellence, students and staff were excited by the energy-saving efforts and technologies being employed. Sustainability ranks high among our goals at the College, and the solar energy system on this building is a key component of our efforts,” said Steve Robinson, the school’s director of Facilities.

“Installations of this size and profile built in Western Canada really showcase the diversity of the Canadian photovoltaic market,” added Jared Donald, president of Conergy Canada. “The solar potential in Western Canada is exceptional. We applaud Okanagan College for its environmental leadership and innovative education programs.”