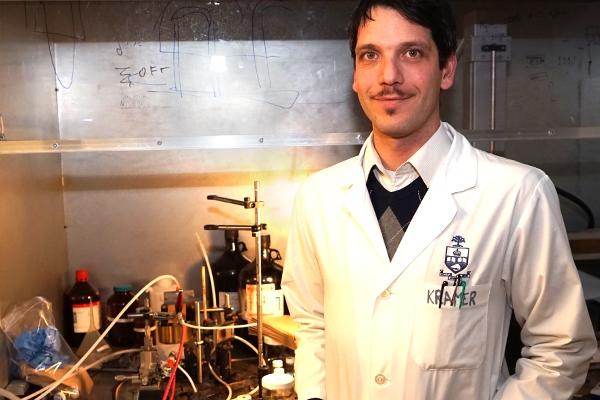 December 9, 2014 – Pretty soon, powering your tablet could be as simple as wrapping it in cling wrap. That’s Illan Kramer’s (ECE) hope. He and his colleagues have invented a new way to spray solar cells onto flexible surfaces using miniscule, light-sensitive materials known as colloidal quantum dots (CQDs), and they feel this is a major step toward making spray-on solar cells easy and cheap to manufacture.

“My dream is that one day you’ll have two technicians with Ghostbusters backpacks come to your house and spray your roof,” says Kramer, a post-doctoral fellow with the Ted Sargent group in The Edward S. Rogers Sr. Department of Electrical & Computer Engineering at the University of Toronto, and IBM Canada’s Research and Development Centre.

Solar-sensitive CQDs printed onto a flexible film could be used to coat all kinds of weirdly shaped surfaces, from patio furniture to an airplane’s wing. A surface the size of your car’s roof wrapped with CQD-coated film would produce enough energy to power three 100W light bulbs—or 24 CFLs.

He calls his system sprayLD—a play on the manufacturing process called ALD (short for atomic layer deposition) in which materials are laid down on a surface one atom-thickness at a time. SprayLD blasts a liquid containing CQDs directly onto flexible surfaces, such as film or plastic, like printing a newspaper by applying ink onto a roll of paper.

— With files from Marit Mitchell

PHOTO 1: It may look more like Junk Yard Wars than high-tech, but U of T researcher Illan Kramer’s device is the first step toward spray-on solar cells. Courtesy U of T.

PHOTO 2: Kramer built his sprayLD device using parts that are readily available and rather affordable; he sourced a spray nozzle used in steel mills to cool steel with a fine mist of water, and a few regular air brushes from an art store. Courtesy U of T.