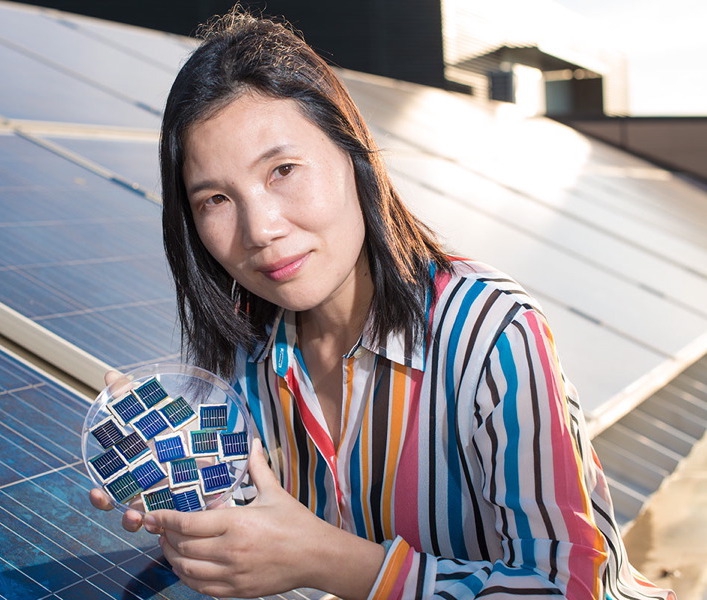 May 5, 2016 – Zero-energy buildings, which generate as much power as they consume, may be closer than we think, as a team from UNSW Australia (The University of New South Wales) says it has achieved the world’s highest efficiency using flexible solar cells that are bot non-toxic and cheap to make.

According to the team, zero-energy (a.k.a. net zero)  buildings have been held back by two hurdles: the cost of the thin-film solar cells used in façades, roofs and windows, and the fact they’re made from scarce, toxic materials.

Now, the UNSW team led by Dr. Xiaojing Hao reports achieving 7.6% efficiency in a 1cm2 CZTS cell, which is made from copper, zinc, tin and sulphur. The team says CZTS has none of the toxicity problems of its two thin-film rivals: CdTe (cadmium-telluride) and CIGS (copper-indium-gallium-selenide). Cadmium and selenium are toxic at even tiny doses, while tellurium and indium are rare.

“This is the first step on CZTS’s road to beyond 20% efficiency, and marks a milestone in its journey from the lab to commercial product,” said Hao. “There is still a lot of work needed to catch up with CdTe and CIGS—in both efficiency and cell size—but we are well on the way.”

“In addition to its elements being more commonplace and environmentally benign, we’re interested in these higher bandgap CZTS cells for two reasons,” said prof. Martin Green. “They can be deposited directly onto materials as thin layers that are 50x thinner than a human hair, so there’s no need to manufacture silicon wafer cells and interconnect them separately. They also respond better than silicon to blue wavelengths of light, and can be stacked as a thin-film on top of silicon cells to ultimately improve the overall performance.”

By being able to deposit CZTS solar cells on various surfaces, Hao’s team believe this puts them firmly on the road to making thin-film PV cells that can be rigid or flexible, and durable and cheap enough to be widely integrated into buildings to generate electricity from the sunlight that strikes structures such as glazing, façades, roof tiles and windows.

“I’m quietly confident we can overcome the technical challenges to further boosting the efficiency of CZTS cells, because there are a lot of tricks we’ve learned over the past 30 years in boosting CdTe and CIGS—and even silicon cells—but which haven’t been applied to CZTS,” said Hao.

Hao believes CZTS’s cheapness, benign environmental profile and abundant elements may be the trigger that finally brings architects and builders onboard to using thin-film solar panels more widely in buildings.

Until now, most architects have used conventional solar panels made from crystalline silicon, explains the team, because they are even cheaper than CZTS cells; however, they don’t offer the same flexibility for curved surfaces and other awkward geometries needed to easily integrate into building-integrated photovoltaics (BIPV).