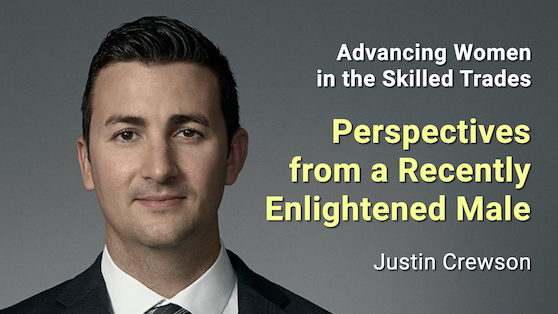 April 15, 2021 – Although I now operate out of an office (or, more accurately, a dining room that doubles as an office), I spent many of my younger years working with my hands.

In my teens, I was a labourer and a forklift operator for a logistics company. Later, during graduate school, I received a truck driving licence and served as a crew leader for a cross-border moving company in Windsor, Ont.

Some of the best memories I have from these times involve camaraderie with the guys, which often entailed cultural norms such as using colleagues for tape ball targets and other forms of horseplay.

Thinking back, as a crew leader, I never really worried much about details like uniforms, equipment or culture. After all, the uniforms were the same for everyone, with the only difference being whether someone needed a Men’s small, medium or large.

We generally had access to the right equipment, but the crew usually seemed more preoccupied with teasing the guy that always insisted on using it. In terms of culture, the norms governing inclusion were simple: one mustn’t drop the object they were carrying while being used for tape ball target practice.

If any of this sounds unprofessional, the leadership didn’t seem to think so. We kept customers happy, and we got the job done.

To be sure, social norms and values are constantly evolving. What was once common practice can quickly become antiquated or unacceptable. Conversely, sometimes things that should change prove to be stubbornly resistant to progress.

Women’s representation in the skilled trades is an example of the latter. While progress is being made in other areas, the most recent estimates from Electricity Human Resources Canada (EHRC) place the percentage of women in trades throughout the electricity sector as being between 5-7%. In some specific trades, such as powerline technicians, it is as low as 1-2% nationally.

Recently, while leading the development of Canadian Electricity Association’s guidance document on Advancing women in skilled trades, I experienced an enlightenment relating to my time as a crew leader. I had never considered how I would feel in a workplace were I only offered uniforms in women’s sizes, or if I were the only male on my crew—or perhaps in my entire sector.

Nor had I thought about less tangible but deeply engrained social factors, such as males not seen as desirable candidates for the role. What if these roles were never presented to me as a viable career option?

I realized when working on this report that these examples were just a few of the many strands that, together, make up a virtual spider’s web of systemic, social and physical barriers preventing women’s increased equity and inclusion in the trades.

With these obstacles in mind, CEA’s guidance document was developed to codify baseline practices and policies being implemented by members to assist in overcoming barriers to women’s inclusion in the trades. More importantly, the document outlines recommendations for further progress.

One is for utilities to place more emphasis on engaging young women regarding trades opportunities before they enter high school. This is a critical missing link in terms of priming the pump for interest in apprenticeship opportunities later in life.

While the business, operational and safety benefits of having women well-represented in workplaces are documented, moving further on this issue is necessary simply because modern society demands it. Given that the electricity sector is expected to fuel our progressively green future, I urge CEA members to ensure they, in turn, fuel social progress by both meeting and exceeding these guidelines.

Indeed, this will mean going far beyond providing uniforms that fit, the right equipment for all physical abilities, and changing workplace cultures dominated by tough guy mentalities. It may even mean thinking twice before throwing that tape ball.

After all, the woman on the crew might have the best throwing arm!

Justin Crewson is director of Regulatory Affairs & Grid Infrastructure with the Canadian Electricity Association. He led the development of the report Advancing women in skilled trades in collaboration with CEA’s Distribution Council and Human Resources Committee. The report aims to codify practices, programs and policies currently in place at CEA member utilities, and is intends to establish baseline recommendations for members as they move toward gender diversity and inclusion in skilled trades staff.

This article—along with other great content—appears in the May 2021 edition of Electrical Business Magazine. Even more back issues are located in our Digital Archive.