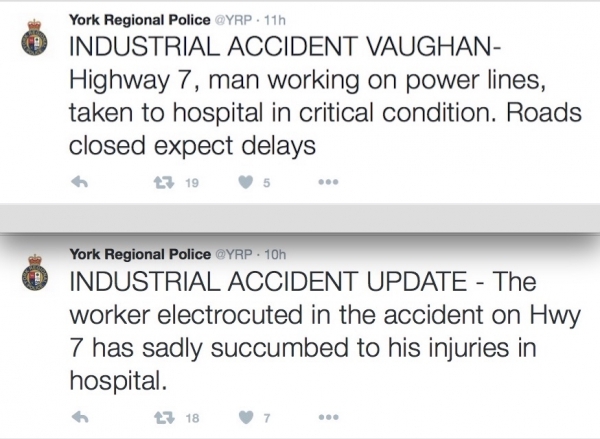 The facts of the case…
PGC Services provides hydro-vacuum excavation to the construction and utilities industries, while K-Line provides design, procurement, construction and maintenance services for overhead distribution lines.

K-Line was retained by the utility owner (PowerStream, now Alectra) to replace the existing overhead powerlines. PGC was subcontracted to excavate holes for the installation of new utility poles.

On that fateful day, PGC sent two of its hydrovac crews to the site. The two crews then began setting up their equipment by extending the boom arms of the hydrovac trucks, and by installing dig tube extensions to allow the vacuum to reach the excavation areas.

The excavation area along the road was serviced by nearby existing overhead powerlines, with a phase-to-phase voltage of 27,600 volts.

The members of both crews were busily performing work tasks, preparing the equipment for excavation, and no one was present to monitor the movement of the hydrovac boom arms to ensure the equipment did not encroach upon the legal safety standard, which states:

No object shall be brought closer than 3 metres from an energized overhead electrical conductor with a nominal phase-to-phase voltage of between 750 and 150,000 volts.

The boom arms of the hydrovac trucks are operated by a remote control. For the truck operated by the first crew, movements were controlled by a series of elevated toggles on the unit. One of the workers was removing the final dig tube from its storage rack on the driver’s side undercarriage of the first truck. This worker, while attempting to pull the dig tube out of the rack, had the boom’s remote control unit hanging underneath one arm.

The other worker, on the passenger side of that truck, had pulled a length of the high-pressure water hose from its spool in the equipment cabinet on the undercarriage of the truck, and was in the process of attaching it to the digging gun/water wand used for the excavation. The water hose, which has a metal-mesh lining, was connected to the truck.

As the driver’s-side worker was pulling the final dig tube out of the storage rack, one or more of the toggles on the remote control was triggered by coming into contact with, or being caught on, a body part or piece of clothing. The movement of the toggle(s) caused the boom arm to move and come into contact with the overhead electrical lines parallel to the road.

The boom arm’s contact with the 27,600-volt conductor caused electrical current to pass through the first truck. The boom arm caught fire in the overhead electrical lines, and the worker on the passenger side of the truck was fatally shocked.

Court’s ruling
The court found PGC failed as an employer to ensure no object was brought closer than 3 metres from an energized overhead electrical conductor, as required by section 188(2) of the Construction Regulation, violating section 25(1)(c) of the Occupational Health & Safety Act (OHSA).

Meantime, K-Line failed as a constructor to ensure a designated signaller was in place to warn the operator each time any part of the vehicle or equipment approached 3 metres from an energized overhead electrical conductor as required by section 188(8) of the Construction Regulation, violating section 23(1)(a) of the OHSA.

That section of the regulation requires a constructor to ensure a competent worker is designated as a signaller and stationed so that they are in full view of the operator, and have a clear view of the electrical conductor and of the vehicle or equipment, and that the signaller warn the operator when any part of a vehicle or equipment approaches the minimum distance from an energized overhead electrical conductor.

A signaller shall not perform any other work while acting as a signaller.

Following guilty pleas, K-Line was fined $160,000 and PGC was fined $125,000. The court also imposed a 25% victim fine surcharge as required by the Provincial Offences Act.