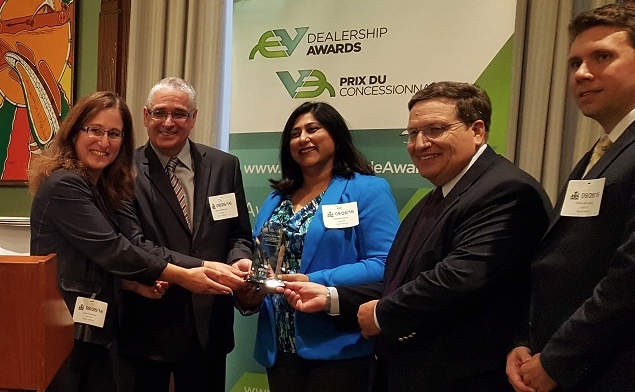 September 27, 2016 – The electric vehicle bandwagon is nothing new to PowerStream. The Ontario energy company has been championing the technology since 2011, when it purchased two Nissan LEAFs, making it “the first organization in Canada to include electric vehicles in its fleet”. In honour of this EV leadership, the utility was recently awarded the inaugural Tom Mitchell Electric Vehicle Leadership Award, presented at the Canadian Electricity Association’s (CEA) annual Canadian Electric Vehicle Dealership Awards.

CEA says PowerStream has been a significant contributor in developing EV charging infrastructure and most recently partnered with the City of Markham to install the first municipally-owned Level 3 DC fast charger, which allows for an 80% charge in 30 minutes.

In 2014, PowerStream also installed a Level 3 charger, available for public use at no charge, at its head office in Vaughan, Ont. and across the utility’s various work locations there are a total of eight Level 2 chargers.

“Our use of [EVs], along with the research and testing we do with respect to charging station technologies is critical to how we build a more modern and responsive grid,” said Brian Bentz, president and CEO of PowerStream.

“The electric vehicle is here to stay and we are proud of our contributions to further promote their use,” added Maurizio Bevilacqua, PowerStream board chair and mayor of Vaughan. “Earning the Tom Mitchell Electric Vehicle Award is a testament to our commitment and success in furthering the development, installation and use of electric vehicle charging technology.”