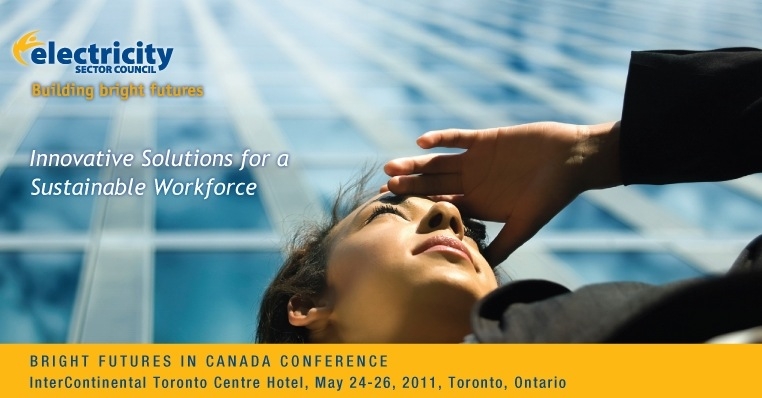 June 06, 2011 – The Electricity Sector Council (ESC) recently hosted its Bright Futures 2011 conference in Toronto. EBMag’s editor, Anthony Capkun, was there to record some of the action, and post it LIVE to EBMag’s Twitter feed. Below, we’ve consolidated all those Tweets for one-stop shopping (in reverse chronological order):

ESC update: EPCOR’s Lowry says he wants employees to stay as long as they are able. “Our success is because of people”.

ESC: Flemming says companies most successful at hiring foreign workers are those who discuss strategy with their unions. yfrog.com/h7td3ggj

ESC: Stevenson says biggest HR concern is not at entry or retirement levels, but at early to mid-career levels. yfrog.com/h78izekj

ESC: Ken Noble of Nigig Power Corp. says youth on reserves have no role models. Those who could be role models leave. yfrog.com/h03g5tbj

ESC: Regarding training, Cornett says “What do you expect people to do differently after training?”

ESC: John Sowagi of OPG says electric utilities invest 6x as much as anyone in Canada on training & education

ESC: Over 40, Andrea tells story of how she went from being a writer to powerline worker with NS Power yfrog.com/h0g8dmfj

ESC: Irving says much hydropower potential in the North, where there aren’t enough workers, training, etc.

ESC: Solar Thermal market is in question now that ecoEnergy program is over (as of March 2011).

ESC: CanSIA’s McDonald explains their goal is to achieve GRID PARITY. They do not want to remain a child of government.

ESC: CanWEA’s Levy says they need your help in updating their list of institutions offering training in wind technologies.

For more on the conference, check out Anthony Capkun’s Editor Greeting in the upcoming June/July 2011 edition of Electrical Business.