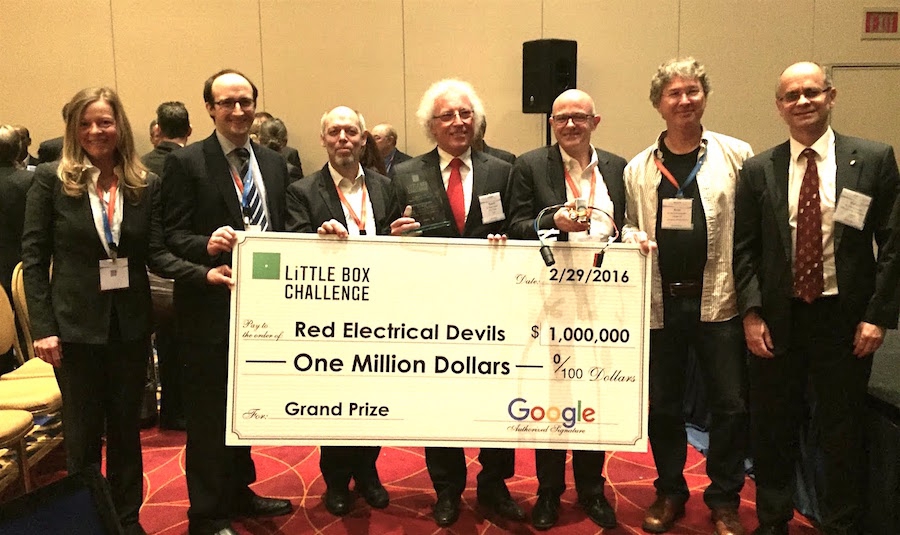 March 1, 2016 – Today, Google and IEEE announced the winner of the “Little Box Challenge”—a competition to invent a “much-smaller” inverter for interconnecting solar power systems to the power grid. Kudos to the Red Electrical Devils, a team from CE+T Power (Belgium).

Their success earned the team a $1-million prize while proving that inverters can be the size of a tablet or smaller, rather than the size of a picnic cooler. Teams from Schneider Electric and the Virginia Tech Future Energy Electronics Center won Honourable Mention.

In October 2015, the finalists brought their inverters to the Energy Systems Integration Facility (ESIF) on the NREL campus in Golden, Colo., for testing. “The overall idea was to test these inverters in a similar fashion to how they would be used out in the field,” said Blake Lundstrom, NREL project lead.

The first step was to verify the inverters met all critical safety-related specs, followed by turning them On and see whether they functioned. Next was a 3-hr procedure to operate the inverters at a number of different operating points and verify whether key specifications were met throughout. After these challenges, the field of 18 finalists was narrowed to the remaining inverters that would proceed to the third round.

Those final inverters were subjected to a 100-hr simulation of real-life conditions, including a DC source that emulated a solar power system, with rapid ramp-ups/-downs in power (typical of an intermittently cloudy day), as well as a realistic, changing load (typical of a residence the inverter was supplying). Each inverter had to meet most of the same specs required of commercially available inverters.

“We were checking that all the specifications were met, under realistic conditions that a similar solar inverter in the field would experience, and evaluating their thermal performance over the long term—those are the key things that we were looking for over those 100 hours,” said Lundstrom.

The teams also presented the highlights of their designs and lessons learned from the design process to a team of researchers and engineers from Google, IEEE, NREL and others in the power electronics industry.

The Red Electrical Devils were declared the winner by a consensus of judges from Google, IEEE Power Electronics Society and NREL. Their inverter had a power density of 143 W/in3—greater than the minimum requirement of 50 W/in3 and 50% higher than the nearest competitor—and a volume smaller than a cube measuring 2.5 inches on each side. The winning inverter also performed better on measurements of electromagnetic compliance.

A key factor in the winning inverters, says NREL, was the use of wide-bandgap semiconductors, a technology that enables power electronics to operate at higher voltages and temperatures, allowing them to transmit more energy through a smaller volume.

“Wide bandgaps offer a lot of advantages over traditional silicon that enabled teams to hit some of the miniaturization and efficiency targets that were needed to be successful in the competition,” said Lundstrom. “Not every single team used wide-bandgap devices, but the vast majority did.”

Leading teams were also innovative in their cooling designs and packaging techniques, including efficient integration of their designs onto printed circuit boards, said Lundstrom.

“The Little Box Challenge actually forced people to try to optimize space, and a nice outcome of that is that some of the techniques to do that are going to be pretty helpful for other aspects of inverter development,” said Lundstrom. “For example, once you have a device that is almost entirely integrated onto a printed circuit board, it’s easier to manufacture. Plus, some of the teams were able to incorporate all this innovation without adding any additional cost to the inverter and, in some cases, these designs may result in reduced inverter cost when mass-produced.”