Cleantech Features Blog Cleantech In-Depth
Renewables or nuclear energy? How about both? 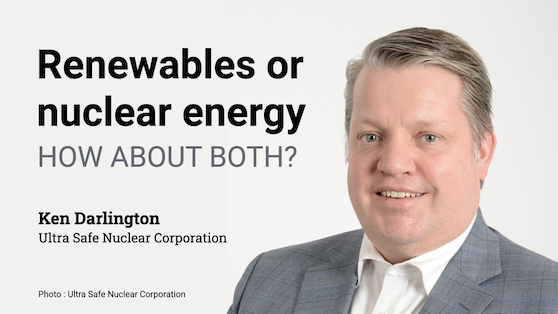 April 8, 2022 – According to a 2021 Abacus Data report commissioned by Canada’s leading electricity associations, Canadians across the country are concerned about climate change and believe we should invest in clean energy technology.

As we work to identify the energy generation options that are most viable for Canada—sustainably, economically, reliably, and politically—it would seem we are compelled to find a single answer.

But there is no single perfect solution.

Instead, we need to implement multiple, complementary systems that will better enable us to meet our collective energy and climate goals. The most viable zero-carbon energy mix is a hybrid approach that leverages multiple clean energy technologies, including renewables such as wind and solar, and next-generation nuclear technologies.

The primary benefit of renewable solutions is clear: zero-carbon power. But while renewable energy generation has advanced and become more economically viable, it is not without limitations; the most notable being the fact that adequate environmental conditions (the right weather, position of the sun, and other environmental factors) must exist to generate power.

Even with battery storage, these limitations preclude renewables’ effectiveness at meeting load demands in certain environments.

However, the benefits of renewables can be realized in just about any scenario when they are complemented by reliable, baseload power. That’s where nuclear becomes an essential companion to renewables.

For off-grid applications, such as remote communities and mines, a new generation of very small modular reactors (known as microreactors) is capable of providing reliable, scalable power production, regardless of environmental conditions. When deployed as a hybrid system, the microreactor acts as a carbon-free peaker plant providing reliable power to complement insufficient renewable supply.

These new nuclear technologies are the result of a research and development effort not unlike that which resulted in the large conventional CANDU reactors that have served Canada and other countries for decades.

Small modular reactors can be built in a factory setting and shipped to power generation sites no larger than a few football fields. The nuclear industry has also advanced nuclear fuel design and developed radically simpler reactors to create passively safe systems and improve fuel utilization to reduce waste.

Availability of zero-carbon Gen IV reactors is in our immediate future. Released in 2020, Canada’s Small Modular Reactor (SMR) Action Plan is the country’s official strategy for the development, demonstration, and deployment of SMRs for multiple applications, and the safe management of fuel and waste. Innovative companies are making great strides in helping us meet our federal, provincial, and territorial emissions targets.

Among the world’s microreactor developers, USNC continues to progress toward demonstrating the technical and financial viability of its Micro Modular Reactor (MMR) and unique fuel designs, including applications in hybrid environments. USNC’s proprietary fully ceramic microencapsulated (FCM) fuel provides safety at the fuel level, rather than requiring complex and extensive safety systems.

The deployment of USNC’s first MMR in Canada achieved an important milestone in 2020 with the signing of a Project Host Agreement for the initial deployment site at Chalk River, Ontario.

The project, which will be constructed and operated by Global First Power—a joint venture between USNC and Ontario Power Generation—is currently the first and only SMR project to enter the formal licensing phase with the Canadian Nuclear Safety Commission (CNSC) and is on track to be the first commercial microreactor deployment in Canada. The project Environmental Assessment (EA) is underway, as is the Licence to Prepare Site—the initial phase of the CNSC licensing process. The start of operations is planned for 2026.

Not this or that, but both

The MMR addresses the primary challenge of integration with renewables—providing reliability and matching supply with demand—and can be deployed as part of hybrid energy systems, addressing inherent power-demand limitations. The nature of USNC’s design allows utilities and power purchasers to effectively address their power generation needs, including spikes in demand, with no carbon emissions.

The MMR operates as a nuclear battery, dispatching its energy as needed, thereby ensuring a stable energy supply.

Additionally, the MMR is set to achieve the goal of zero-carbon power generation in settings that typically rely on diesel for electricity generation. For example, a single MMR system producing 5 MW of electricity can replace over 200 million litres of diesel during its 20-year fuel cycle.

When we consider a mining operation (a potential use case for MMRs) that requires 20 MW of energy, the MMR represents a displacement of over 800 million litres of diesel—the equivalent of 9000 rail tankers. This works out to 40 million litres per year, the same volume as 16 Olympic-size swimming pools of diesel every single year.

Advancements in Gen IV nuclear, together with the support of Canada’s federal and provincial governments, means Canada is maintaining a leadership position in developing solutions to meet our power and net zero goals. That solution needs to leverage all viable technologies at our disposal, including approaches that combine sustainable, renewable technologies with Gen IV nuclear.