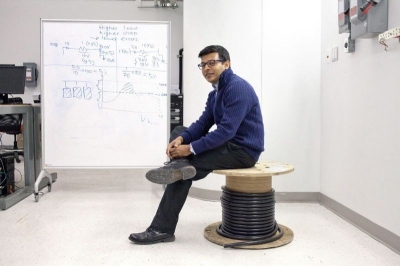 February 24, 2015 – A researcher from Ryerson University in Toronto says he has found a way to address some of the major challenges related to wind power.

Bhanu Opathella is a postdoctoral fellow in Ryerson’s Centre for Urban Energy (CUE), a research and technology demonstration centre. He led a 2012 study that explored how to optimize Ontario’s wind farms. The study, which also involved Bala Venkatesh, academic director of the CUE, was published in the Institute of Electrical and Electronics Engineers’ Transactions on Power Systems journal.

According to the report, wind power is associated with three challenges: wind is unpredictable, inconsistent and the energy it produces cannot be dispatched on demand. For Opathella, the solution lies in getting them to work together.

“Since each generator has a different output, a turbine on one farm can work at full capacity while a turbine on another farm can operate at just 10% capacity,” says Opathella.

The researchers also conducted a case study on a hypothetical, first-of-its-kind Wind Generators Co-operative that involved 10 wind farms in Ontario. The study showed that the uncertainty and variability of wind energy can be minimized when the wind farms work together and store their energy in a common hydroelectric facility.

Backup power is a necessity to make wind power viable due to daily fluctuations in the demand for electricity and the changing availability of wind, which blows intermittently and is stronger at night, says Opathella. The co-ordinated operation of wind farms, however, reduces the need for backup power in the electricity system, he explains.

Additionally, using a pump storage hydro power plant eliminates the problem of too little or too much supply. Since these facilities are too expensive to build to serve a single wind farm, says Opatella, a co-operative of wind farms improves the overall efficiency and cost-effectiveness of pump hydro power plants.

— With files from Dana Yates.