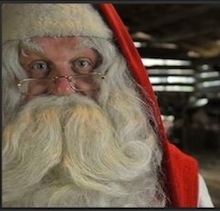 Santa Claus and his amazing Portable North Pole (PNP) console will be online during the entire holiday season. With just a few clicks, this technological marvel will let your loved ones receive a personal message from Santa Claus, sent directly from his village in the North Pole. Rediscover Christmas with this immersive and unique experience that brings the holiday magic back to life.

This year marks the dawn of a new age in Santa’s Village. The production of the PNP allowed—for the first time in history!—a group of humans to collaborate with Santa and his team over a long period. As the PNP’s production team and Santa’s inner circle grew closer, we were able to discover some of Jolly Old St. Nick’s best-kept secrets… and to convince him it was time to reveal some of them.

In the wake of the PNP’s massive success, Santa decided to set up the DHR (Department of Human Relations). This elf-run organization will help demystify life in Santa’s village and separate fact from fiction. The DHR’s first official publication, Live from the Village, will launch December 1. This daily bulletin will allow children from all over the world to follow the excitement as the elves get everything ready for Christmas.

In addition to this publication, the PNP’s production team has gathered the most popular questions about Santa and life in the North Pole that we have received over the years, and met with Sanoma, the DHR’s official “spokes-elf”, to try to get some answers.

(This activity is FREE, and a lot of fun to boot! – Editor.)

Related
Santa Claus is ready to chat with your loved ones via Portable North Pole
Santa Comes to Life in Personalized Video Messages – Dec09
GE scientists say they have a greener, smarter sleigh for Santa Claus
Familiar face returns to Lafert North America