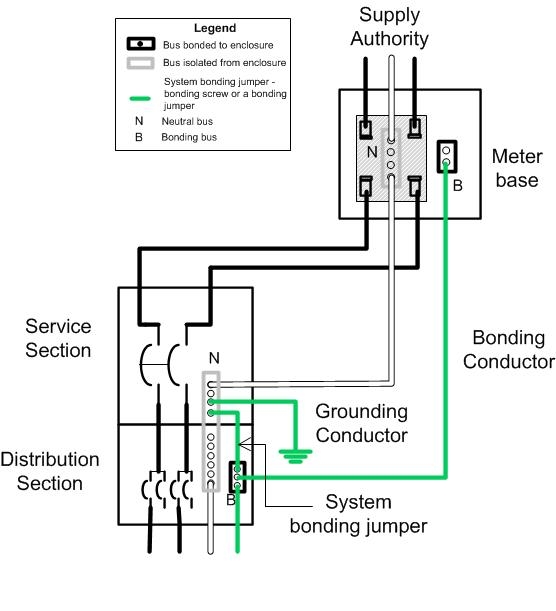 August 22, 2018 — In my last article about CE Code 2018’s Section 10 rewrite (EBMag May 2018), I explained some of the new structures and definitions, and touched upon the requirements and changes regarding grounding a consumer’s services at a meter-mounting device.

Here I will explain changes related to grounding a consumer’s service at the service box, and how to determine bonding conductor size.

Rule 10-210(d) requires there is no connection between the grounded conductor (neutral) and the non-current-carrying conductive parts of electrical equipment on the supply or load side of the grounding connections.

This represents a significant change to the current practice for services, where the meter is on the line side of the service box as permitted by Section 6 and the 2015 CE Code, which required no connection to the grounded conductor on the load side of the service.

Where the neutral bus is isolated from the meter enclosure, it is imperative you comply with Rule 10-210(d) requirements and provide a bonding conductor between a meter mounting device and the service box. Otherwise, supply authority workers could be exposed to a serious safety hazard. Were there a fault to ground in the service box, and no bonding conductor, there is no return path to a source for the fault current. Hence, the meter enclosure would remain energized.

One by-product of the changes in the 2018 code involves grounding two or more buildings supplied from the same service e.g. when school portables are added to the service. Based on the concept of single-point grounding (with the intent of eliminating objectionable current over grounding conductors), it is no longer permitted to connect the grounded conductor in each building to the grounding electrode and the non-current-carrying conductive parts of electrical equipment.

For installations as per Figure 2, the bonding conductor between two buildings shall be determined in accordance with Table 16 based on the rating of the overcurrent device protecting ungrounded conductors.

This is also how one should size the system bonding jumper in both Figures 1 and 2. The change supports the objective of bonding, which is to facilitate the operation of protective devices.

To compensate for voltage drop, Rule 10-614 requires the bonding conductor’s size to increase when the circuit conductors’ size is increased.

Tatjana Dinic, P.Eng., is the acting director for Engineering & Program Development at Electrical Safety Authority (ESA) where, among other things, she is responsible for product safety, code development, improving harmonization and alternative compliance, and aging infrastructure programs. She is Professional Engineer with M. Eng. degree from University of Toronto and a member of CSA CE Code-Part I, Sections 4, 10 and 30. Tatjana can be reached at tatjana.dinic@electricalsafety.on.ca .

This article originally appeared in the July/August 2018 issue of Electrical Business Magazine.