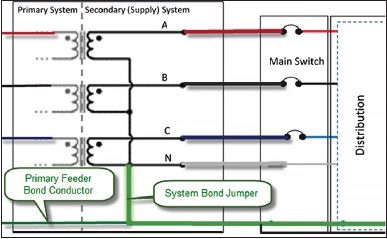 February 26, 2018 — What is a separately derived system and why is it important for Section 10? To fully understand, we need to look at how we define derived as it is used throughout the CE Code, as it has many synonyms and definitions.

Some of the synonyms include obtain, get, take, procure, extract and attain. The definitions that fit how the term is used in the code currently include to take, receive or obtain (especially from a specified source or origin), create new… to obtain something from something else.

Examples of this use include:

• Rule 24 -112: Bonding-to-ground in intermediate and critical care areas shall conform to Rule 24-104, whether the supply is derived from a grounded or an isolated system.

• Micro-hydropower system: a system with a rated output of 100kW or less operating as an interconnected or stand-alone system, and consisting of one or more hydraulic turbines that convert energy derived from flowing and falling water primarily by utilizing the available head difference.

• Table 16B Note: the connection between the grounded system conductor and
the equipment bonding conductor at the service box, or a separately derived
system, commonly referred to as the system bond jumper.

So how does all this compare against the new definition of a separately derived system?

So a transformer that isolates the conductors of both systems would meet the intent of this wording; however, the new definition leaves customer-owned transformers in question, especially when they are second-level transformation or fed by owner-supplied generation. By removing the term authority from the definition, these transformers would then be included in the definition as the customer’s supply system; it’s now simply a different voltage, and it would not require it be fed from a supply authority to meet the definition.

If we stretch ourselves and assume that these generators are the supply authority, we are fine with the definition for the transformation to 600/347; however, when we step down to 480V or 120/208V, these would no longer be defined as separately derived.

Yet, in all these examples, they are separately derived. (Note: I am referring to isolation transformers specifically, as there must be no connection between source conductors.)

Effective with the adoption of the new code (which may already be in effect in some locations), a solidly grounded, separately derived system shall be grounded as close to the source as possible; the bonding conductor included in the primary supply shall be sufficiently sized for the purpose of grounding the new system, and shall be interconnected by the system bond jumper.

David Pilon has been an electrical inspector with SaskPower since 2000, and is currently the vice-chair of the Canadian Certified Electrical Inspector (CCEI) committee of the International Association of Electrical Inspectors (IAEI), Canadian Section. David can be reached at dpilon@saskpower.com.

This article originally appeared in the February 2018 issue of Electrical Business Magazine.