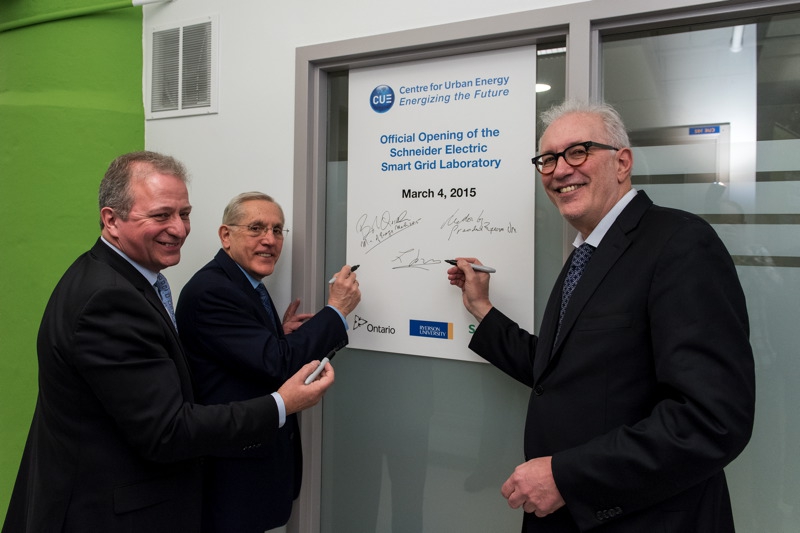 “Smart grids are the future of power in Canada,” said Léonce Fraser, vice-president, Projects Execution Centre, Schneider Electric Canada. “Pilot projects and testing will play a key role in building out the smart grid, and we want to help companies with smart grid products, utilities and educators build a better future for Canadian energy.”

Dignitaries from Schneider Electric, Ryerson University and PowerStream—along with Ontario’s Independent Electricity System Operator (IESO) and Ministry of Energy, and others—today officially opened the lab, which was sponsored by the ministry and funded in part through the Ontario Smart Grid Fund initiative.

“Supporting Ryerson’s Centre for Urban Energy, and the development of the Schneider Electric Smart Grid Lab, we are setting the stage for innovations that will be the backbone for our energy system for future generations,” said energy minister Bob Chiarelli.

The SESG Lab can replicate the operation of a substation and feeders of an electrical utility distribution system. It has core infrastructure that supports organizations in the research and development of leading-edge solutions and systems pertaining to smart grid technology.

PowerStream will be the first utility to make use of the SESG Lab by creating a physical replica of three feeders from its Greenwood transformer station in Vaughan. PowerStream will test its system under different renewable energy scenarios and explore practical solutions to challenges such as reverse flows on feeders. This will include the role of electricity storage devices in reducing line losses and increasing the capacity for renewable energy. The utility will also test how to reduce customer energy costs through leading-edge power controls.

In addition to acting as a facility for collaborative industrial research and testing, the SESG lab will give the next generation of smart grid engineers, scientists, planners and operators hands-on experience in a utility environment. Colleges and universities can take advantage of the centre to provide real-world training for students, research solutions and collaborate with industry.

“The Centre for Urban Energy is dedicated to solving urban energy problems and the Schneider Electric Smart Grid Lab provides an ideal opportunity for utilities and entrepreneurs to test new processes and products in a real-world environment,” said Sheldon Levy, president, Ryerson University. “It also provides a perfect setting for utilities to train their employees on new systems and for students to learn how the next-generation energy grid works.”