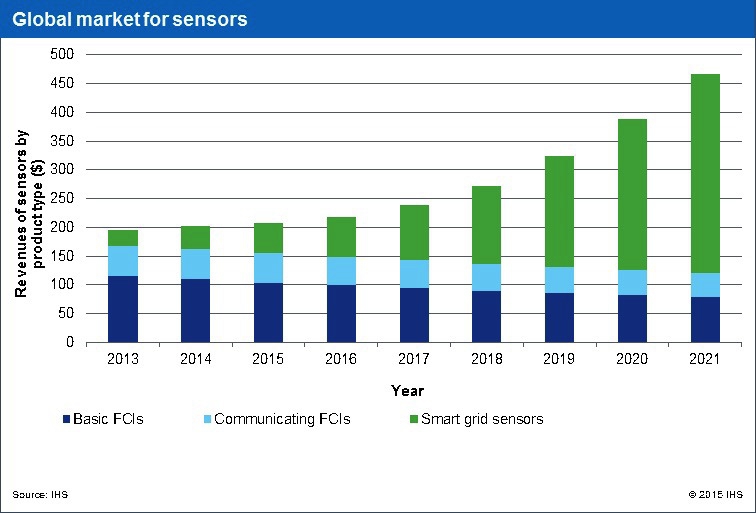 March 17, 2015 – The market for smart grid sensors is set to rapidly expand in the coming decade, says research outfit IHS, with revenues growing nearly 10-fold from 2014 to 2021.

Based on information in a new study from IHS Technology, the market for smart grid sensors is centred mainly in North America, where there is a mixture of a few large installations and many smaller pilot projects. Last year, however, IHS observed a series of larger contracts being reviewed in North America, while markets in other global regions also showed signs of potential adoption.

The larger tenders for smart grid sensors support the positive outlook forecast by IHS. The United States market is estimated to reach $30 million in 2014; however, annual growth from 2015 to 2021 is expected to average 36%.

“The United States has been on the forefront of smart grid sensor market development,” said Fizza Arshad, market analyst with IHS. “Many factors have converged to make this happen, but one of the stronger influences was the American Recovery and Reinvestment Act of 2009.”

“The smart grid movement that resulted from ARRA spurred interest from telecommunications providers to see critical infrastructure, like the electric grid, as a potential client base,” Arshad said. Since 2014, some of these larger contracts for smart grid sensors in the United States are going up to a thousand or more units, revealing greater acceptance of the technology.

The current market is centred primarily in the United States, says IHS, but Europe, Latin America and other global regions are also forecast to become high-growth markets.

“Latin America is an untapped market with a lot of potential to grow,” Arshad said. “As the governments in this region take note of the grid problems, more and more policies and utility benchmarking schemes are being put in place to encourage investment in smart grids.”

In Europe there is a particularly strong need for renewables energy management, added IHS, as the influx of energy from solar and wind is creating a large demand for improved grid monitoring by utilities companies. Greater adoption of smart grid sensors across Europe is anticipated, as utilities will need more granular measurements on the grid to efficiently integrate renewables. Since many of these residential solar installations are concentrated in dense, urban environments made up of large underground distribution networks, smart grid sensor growth in Europe is supported by a sharp increase in sales of underground sensors, IHS concludes.

“A growth of this magnitude shows that smart grid sensors will become widely accepted in the near future,” Arshad said, “and while sensors are not becoming business as usual for most smaller utilities, larger utilities companies will incorporate sensors as part of their regular purchasing decisions.”