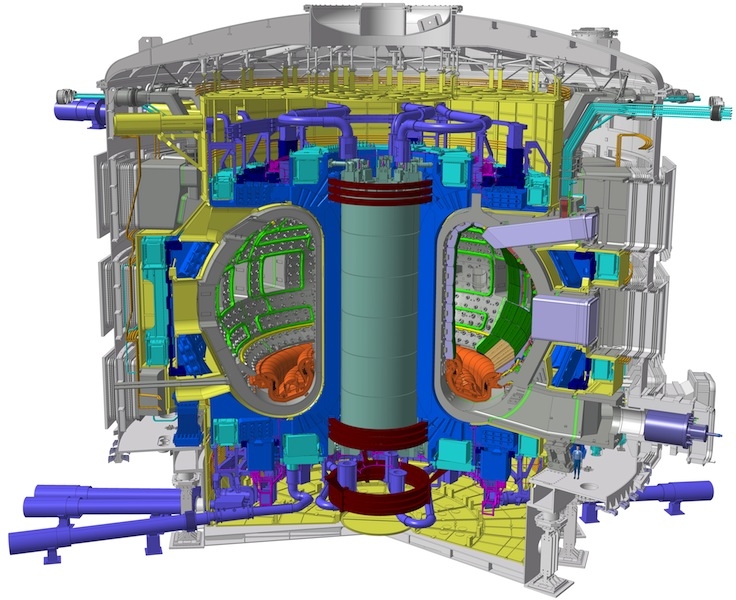 June 8, 2012 – University of Tennessee researchers have successfully developed a key technology in developing an experimental reactor that can demonstrate the feasibility of fusion energy for the power grid. Nuclear fusion promises to supply more energy than the nuclear fission used today but with far fewer risks.

Mechanical, aerospace and biomedical engineering professors David Irick, Madhu Madhukar and Masood Parang are engaged in a project involving the United States, five other nations, and the European Union, known as ITER. UT researchers completed a critical step this week for the project by successfully testing their technology that will insulate and stabilize the central solenoid—the reactor’s backbone.

ITER is building a fusion reactor that aims to produce 10 times the amount of energy that it uses. The facility is now under construction near Cadarache, France, and will begin operations in 2020.

Since 2008, UT engineering professors and about 15 students have worked inside UT’s Magnet Development Laboratory (MDL) to develop technology that serves to insulate and provide structural integrity to the more than 1000-ton central solenoid.

A tokamak reactor uses magnetic fields to confine the plasma—a hot, electrically charged gas that serves as the reactor fuel—into the shape of a torus. The central solenoid, which consists of six giant coils stacked on top of one another, plays the starring role by both igniting and steering the plasma current.

The key to unlocking the technology was finding the right material—a glass fiber and epoxy chemical mixture that is liquid at high temperatures and turns hard when cured—and the right process of inserting this material into all of the necessary spaces inside the central solenoid. The special mixture provides electrical insulation and strength to the heavy structure. The impregnation process moves the material at the right pace, factoring in temperature, pressure, vacuum and the material’s flow rate.

This week, the UT team tested the technology inside its mockup of the central solenoid conductor.

It took two years to develop the technology, more than two days to impregnate the central solenoid mockup and multiple pairs of watchful eyes to ensure everything went according to plan. And it did.

This summer, the team’s technology will be transferred to US ITER industry partner General Atomics in San Diego, Calif., which will build the central solenoid and ship it to France.

ITER—designed to demonstrate the scientific and technological feasibility of fusion power—will be the world’s largest tokamak. As an ITER member, the US receives full access to all ITER-developed technology and scientific data, but bears less than 10% of the construction cost, which is shared among partner nations. US ITER is a Department of Energy Office of Science project managed by Oak Ridge National Laboratory.