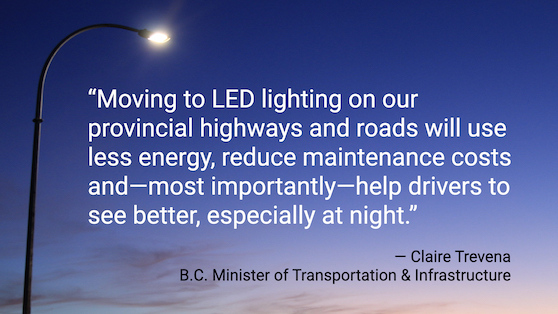 September 10, 2020 – Vancouver Island will be the first region in British Columbia to upgrade lighting infrastructure along provincial highways and roadways to LEDs.

Once the province completes the LED upgrades to the remaining 24,000 lighting fixtures, provincial energy costs are expected to be reduced by more than $2 million each year.

The ministry is already incorporating LED infrastructure into new projects. The replacement of lighting along provincial highways and roadways with LED fixtures is part of its new electrical maintenance standards, which include:

The ministry awards contracts to private companies to maintain electrical infrastructure along roughly 47,000 km of provincial highways and roadways. Each contractor is responsible for repairs and maintenance of overhead/streetlights, traffic and pedestrian signals, and tunnel and snowshed lighting, as well as electronic signs and web cameras.

All four regions will assume the new electrical maintenance standards by 2022 through a staggered, open-bidding process.