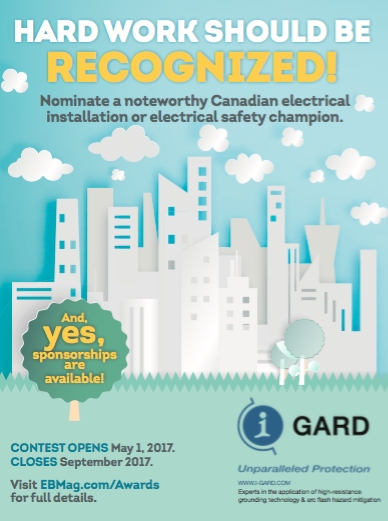 May 29, 2017 – Over the last few issues, we’ve teased the coming of an expanded awards program, which we’re officially re-launching as the Canadian Electrical Awards, starting May 1, 2017.

It just makes sense. There are so many Canadian electrical professionals doing great work across the country (some of which have already been showcased in the pages of Electrical Business) but, while some jurisdictions have their own local awards programs, we want to showcase this talent across Canada.

Projects will be considered under several categories:

The Electrical Safety Champion will remain a special category within the overall awards program, and will continue to recognize Canadian companies and individuals who are passionate about promoting the electrical health & safety of electrical workers. But rather than individual categories for Contractor, Maintenance Team, Utility and Individual, all submissions from any of these groups will be judged together to produce the Canadian Electrical Safety Champion for 2017.

This special award is sponsored exclusively by I-Gard, who has been committed to electrical safety since 1982 (i-gard.com).

Projects will be evaluated against criteria that include (but are not limited to):

Winners will be featured in the magazine and online at EBMag.com, and will also receive a beautiful trophy to display… plus the bragging rights that go with it!

And, in line with the theme of keeping it simple, we have done away with individual category sponsorships, thereby allowing more of our industry partners the opportunity to promote their brand while promoting award-winning electrical installations.

Submissions are only accepted via the online form. For more information, including the Entry Form, Sponsorship, etc., visit EBMag.com/Awards, but don’t delay. While the competition doesn’t close until September 2017, don’t let that date sneak up on you. Good luck!