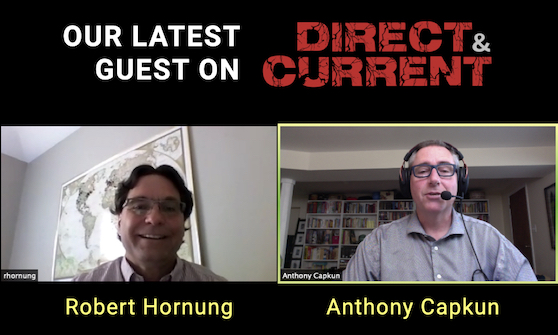 Leading this new association is Robert Hornung, who served as president of CanWEA for 17 years.

“I would say we have a keen interest in ensuring that our discussions and debates around energy are fact-based, because we want to ensure that the decisions that we are taking are well-informed decisions going forward,” Robert says.

In this episode of Direct & Current, Robert joins Anthony Capkun to not only talk about CanREA’s vision and goals, but to dig deeper and answer questions like: Is there a distinction between renewable energies and green energies? (Yes, in fact) What was the rationale for adding energy storage to CanREA’s equation? What, exactly, does our energy future look like?

“It’s not our intention as an association to attack any other forms of generation… we will compare different forms of generation on a facts basis in terms of various attributes that they have, but the reality is we are going to need a lot of different approaches to deal with targets like those identified in the Paris accord,” Robert explains.