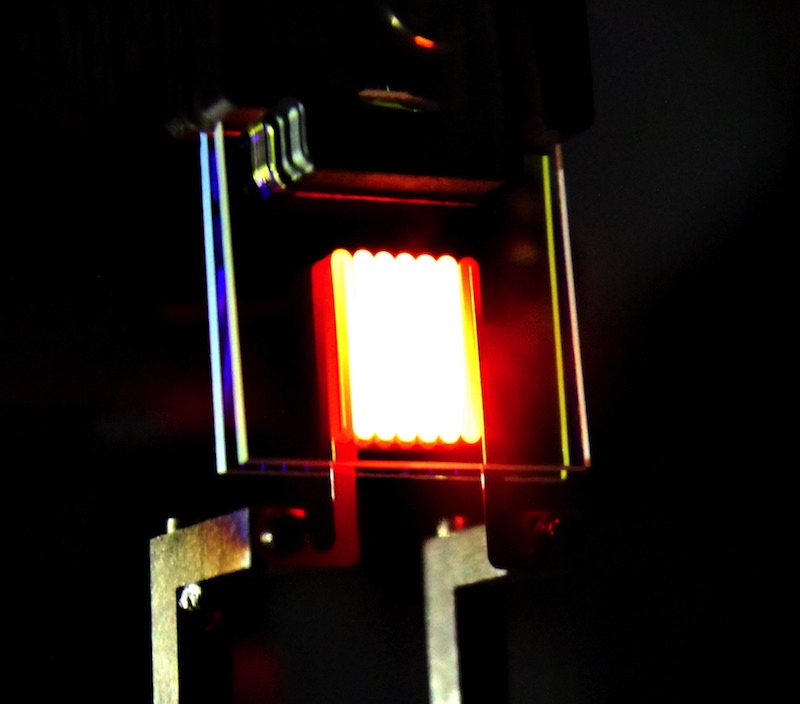 January 12, 2016 – Despite facing extinction, traditional incandescent light bulbs may yet make a comeback thanks to a technological breakthrough by researchers at MIT and Purdue University.

The problem with incandescents has never been light quality, but the fact that over 95% of the energy that goes into them is wasted, mostly as heat. That’s why country after country are phasing them out, if not outright banning them.

The MIT and Purdue researchers may have found a way to change all that via light recycling.

PHOTO: A proof-of-concept device built by the researchers demonstrates the principle of a two-stage process to make incandescent bulbs more efficient. This device already achieves efficiency comparable to some CFL and LED bulbs. Photo courtesy of the researchers.

The key is to create a two-stage process: the first involves a conventional heated metal filament, with all its attendant losses; then, instead of allowing the waste heat to dissipate in the form of infrared radiation, secondary structures surrounding the filament capture this radiation and reflect it back to the filament to be re-absorbed and re-emitted as visible light. These structures—a form of photonic crystal—are made of Earth-abundant elements, researchers explain, and can be made using conventional material-deposition technology.

It’s that second step that makes such a difference in how efficiently the system converts light into electricity, the researchers note; the efficiency of conventional incandescents is between 2% and 3%, while that of fluorescents (including CFLs) is between 7% and 13%, and that of LEDs between 5% and 13%. In contrast, the new two-stage incandescents could reach efficiencies as high as 40%, the team says.

That said, the first proof-of-concept units made by the team come nowhere near 40%, achieving only about 6.6% efficiency but, even at that level, the concept units rival the efficiency of some of today’s CFLs and LEDs, and are a three-fold improvement over today’s incandescents.

The team refers to its approach as light recycling, Ilic explains, since their material takes in unwanted, useless wavelengths of energy and converts them into desirable visible light wavelengths. “It recycles the energy that would otherwise be wasted,” says Soljacic.

A key to their success was designing a photonic crystal that works for a range of wavelengths and angles. The photonic crystal itself is made as a stack of thin layers, deposited on a substrate.

Ilic explains that when you put together layers, with the right thicknesses and sequence, you can get very efficient tuning of how the material interacts with light. In their system, the desired visible wavelengths pass right through the material and on out of the bulb, but the infrared wavelengths get reflected as if from a mirror. They then travel back to the filament, adding more heat that then gets converted to more light. Since only the visible ever gets out, the heat just keeps bouncing back in toward the filament until it finally ends up as visible light.

The technology involved has potential for other applications, Soljacic says, as in energy-conversion schemes such as thermo-photovoltaics (in which heat from an external source [chemical, solar, etc.] makes a material glow, causing it to emit light that is converted into electricity by a PV absorber.

“LEDs are great things, and people should be buying them,” Soljacic says, “but understanding these basic properties” about the way light, heat, and matter interact and how the light’s energy can be more efficiently harnessed “is very important to a wide variety of things.”