“So what’s an electrician? Somebody that should be learning all the time. Because there’s ever-changing information, you know?” 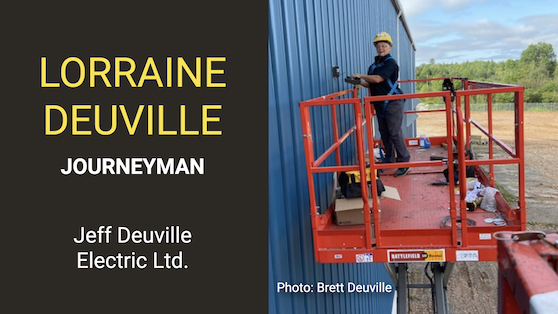 August 6, 2021 – Back in 1968, when she was 18, Lorraine helped her boyfriend, Owen Deuville, rewire a house in their Truro community. “And I thought, ‘Gee, this is something I could do!’. Of course, my mother was totally against it,” Lorraine says.

“She said ‘The neighbors will think you’re looking through their closets and dresser drawers. She didn’t think it was appropriate for women. But I did it anyway, and I really enjoyed it,” she says, before adding with mischievous smile, “And then Owen and I eloped.”

My conversation with Lorraine Deuville—who is among Nova Scotia’s earliest female licensed electricians—started with an email from her boss (and proud son), Jeff Deuville, in which he wrote:

“I just received the recent edition of the magazine with the “Women in Power” on the cover [EBMag, April 2021]. My mother, Lorraine, has been a licensed electrician for over 30 years. [She] had her own electrical contracting business, along with my father (who is also an electrician) […] Mom is still working on the job at 72-years old.”

This, of course, got my attention! But perhaps what kept my attention—besides the fact she is still on the tools—is that Lorraine also had stints as a majorette instructor, part-time waitress, dental assistant… not to mention mom to three children. 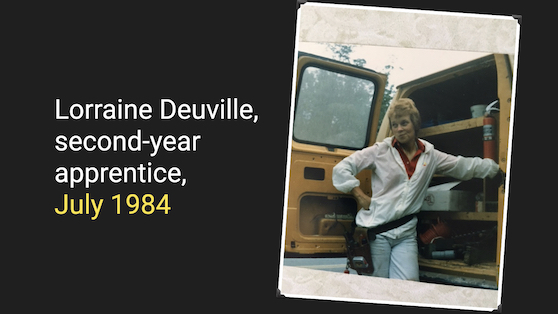 Growing up, Lorraine’s father was a lineman with the Truro Electric Commission. She and the other neighbourhood kids would often run to meet her dad as he wheeled down the street in his work truck, and he would let them jump up on for a ride.

Sadly, her father was killed on the job in 1972, when Lorraine was 22. It was hard for everyone, but especially Lorraine’s mom, who was living with depression… a condition largely unknown at the time. She died by suicide in 1976.

“There is one major motivator that moved me, and affected my decision to acquire journeyman status, and that was the death of my mother,” Lorraine recalls. “To see someone so helpless and broken-hearted by her husband’s death—that she would end her own life at the age of 56—is unimaginable for many people. She was a very hard worker and loved her family.”

“So, you could say it was out of fear that I chose to get into the trade and become a journeyman… so I could look after myself.” 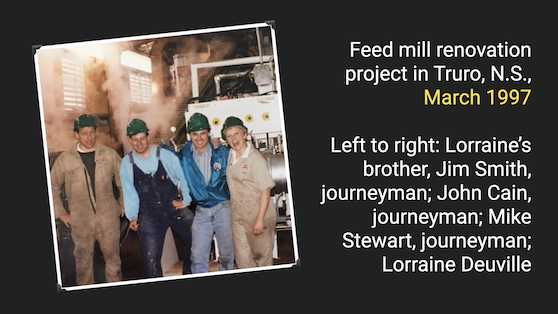 Various people, including Owen, told Lorraine not to worry about getting her ticket, but she pursued her licence nonetheless, explaining, “If you’re dead, or we’re divorced, or you’re disabled, I need to be able to buy a permit to do work. So I’m going for my license.”

So after working with her husband for years, Owen formally took her on as an apprentice, in 1982. As it turns out, getting registered as an apprentice was one of Lorraine’s biggest challenges.

In effect, she was told “We have all these young fellows that need to get into the trades, and we don’t have enough room for them. So we don’t want to take a married woman”.

But Lorraine persevered and, in the end, completed her apprenticeship and became a full-fledged journeyman… a title she embraces proudly. “So what’s wrong with journeyman? That’s my personal preference. I’m a journeyman.”

“I’ll tell you one story when I first started with Owen. We went into this house that he was going to do work on, and he said to the fellow, ‘I hope you don’t mind, but my wife is starting to work with me. Do you have an issue with her coming onto the job?’.”

The homeowner replied, “It’s not my business; it’s your business. And I don’t care who you have working for you”. 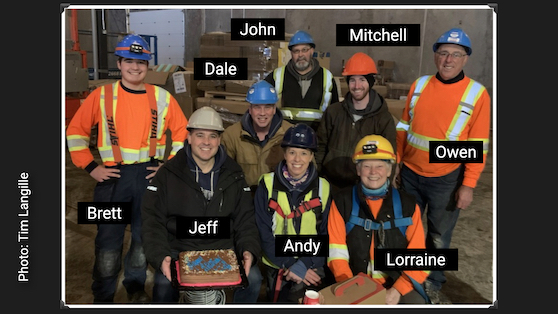 “What a great customer,” Lorraine remembers. “Owen realized right then and there that he didn’t have to answer to anybody else either. And if they didn’t want me, he wouldn’t go either.”

A life of life-long learning

When she got her licence, Lorraine remembers her instructor saying “This is only the beginning. You have your licence to start learning”.

“So what’s an electrician? Somebody that should be learning all the time. Because there’s ever-changing information, you know?” Lorraine insists, adding, “And I think I am always learning.”

Lorraine loves to learn, but not just electrical. “I love what I’ve learned from the building trade alone, where you watch construction from the bottom up, and you learn all these things you can do yourself. It wasn’t just electrical; it could be tearing down walls in my home at 11 o’clock at night when I decided I didn’t want this wall anymore,” Lorraine laughs. 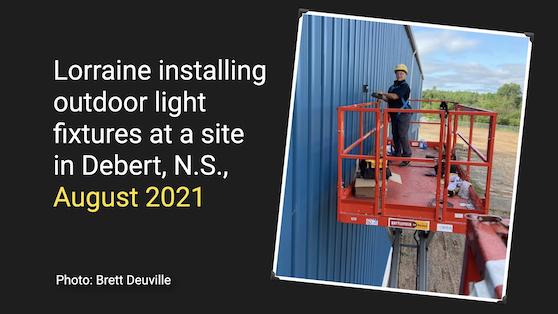 “I’m fixing my own water heater, and helping other people. I wouldn’t have been able to do these things if it wasn’t for having the electrical trade and working with a lot of good tradespeople. You know, there were so many of them, and I’m grateful to them.”

That gratitude also extends to the people who “have hired me and trusted me,” Lorraine says. “We’re in their homes when no one is around; they give me their keys and say ‘Go in whenever you can and get it done’. It’s an honour to be able to do that, to serve people that trust you.”

At 72 years and still working jobs, Lorraine is often asked when she is going to retire.

“Never! I should hope to die on the job,” she says proudly. “That would be the most pleasant place to go.”