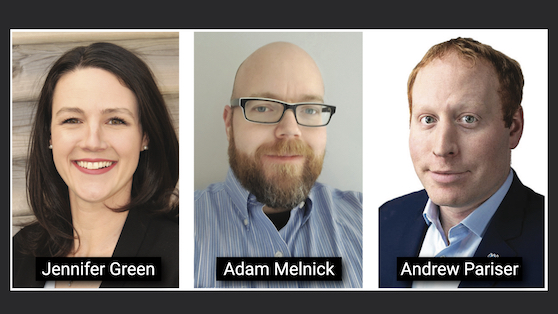 February 26, 2021 – Becoming an ironworker or a sprinkler fitter should be “as obvious as becoming a firefighter or a lawyer,” said Monte McNaughton, Ontario’s Minister of Labour, Training & Skills Development, when the province announced in Fall 2020 that it had appointed three youth advisors to help attract youth to the trades:

Jennifer Green, director of Competitions & Young Women’s Initiatives at Skills Ontario. She holds a C of Q, a Certificate of Apprenticeship, and an Ontario College Certificate for Industrial Mechanic Millwright.

Adam Melnick, director of Government & Community Relations for the Heat & Frost Insulators & Allied Workers, Local 95 Ontario. He holds an Ontario C of Q as a heat & frost insulator, and a diploma in recreation and leisure services from Sir Sandford Fleming College.

Andrew Pariser, vice-president of Residential Construction Council of Ontario since 2014. He graduated from Queen’s University with a BA in economics and geography, then later with a Master’s degree in industrial relations.

The three have been charged with engaging with youth, educators, business, parents and other partners—as well as Minister McNaughton—on how to reduce stigma and make the trades a viable first choice for young people.

They will advise on increasing awareness among elementary school students, and on making it easier for high school students to learn about the trades, and to begin an apprenticeship pathway while continuing to earn secondary school credits.

So, how big is the problem? How lean are registrations and completions in the trades? Are all trades suffering for talent equally? How will Jennifer Green, Adam Melnick and Andrew Pariser measure success?

These were just some of the questions we had, so we reached out for some answers.

Electrical Business: We’ve seen all kinds of numbers being quoted with regard to retirements, and the need for new talent in trades. How realistic are those numbers? How big is the problem?

Jennifer: In 2016, one in three journeypersons were over the age of 55. The average age of an apprentice today is 29. When I was an apprentice, I was the youngest by over a decade compared to person next closest to my age. But the number is in the hundreds of thousands in the coming years across Canada.

Let’s say you need something done to your house… you need an electrician. What if there aren’t enough electricians? In my house, right now, there’s quite a large project I would like to do, but I can’t get somebody for at least three years in my region; they are that booked.

So [a skilled trades shortage] affects every person in every way. If there’s a storm, who’s fixing it? Without powerline technicians, you don’t have electricity. So it’s quite a vast problem.

Adam: I see it as a complex problem more than a big problem. As you look at the 140+ trades in the province, and speak with advocates, employers, labour associations, what you start to understand is that almost each of these trades has regionally specific challenges.

Some trades are relatively popular. You know, when you talk to someone about getting into, say, construction, everyone tends to say Electrician, or maybe Plumber, or Carpenter, etc. And so there are popular trades that may not have the same challenges as lesser-known trades, like mine: an Insulator. So our trade would have a challenge in attracting youth and talent, whereas other trades may not.

Andrew: I agree, it’s complex. To me, this gets into stigma and it gets into pathways. Construction has a marketing issue, because people think there’s just one job in construction, even though there’s 400,000 workers.

Adam is 100% correct. We’ve got 144 trades in this province, and there is no way you’re going to create a strategy that’s going to work for all 144. So there needs to be specialization; we need to understand where shortages exist. We need to also do a better job mapping out pathways. What are real jobs that exist? Where is the demand?

Electrical Business: Your mandate is to attract youth to the trades. What age group are you starting at, and why is it key to start with this age group? What communications and messaging should be employed with these youth?

Andrew: I think our review classifies anyone under the age of 30 as a youth, but we are very much aware that career decisions are made much sooner than the age of 30. So we have a specific focus to get to primary school children, grades 7 and 8, and early high school.

Adam: And to help build some parallel structure around the opportunity of a pathway or career in the skilled trades; that they are of equal value, socially, as pursuing the “traditional” university or college model… although I would argue that apprenticeship is much more traditional. It’s been around for hundreds and thousands of years.

A real focus is [helping youth] develop a deeper understanding of trades opportunities, prior to high school, so they see them as equal opportunities when planning their careers, when speaking with guidance counselors, parents, and teachers.

And to have students think about the long-term ramifications of classes they choose; they should not undervalue themselves or underestimate the academic effort involved with the skilled trades. They may skip some subjects and still think they can get into a trade.

We need to solidify the information around career pathways, and what it takes to get into those trades, and how to be successful in those trades.

Jennifer: “You can’t be what you can’t see”. Growing up, you go to the doctor for regular shots, when you’re sick… so everybody knows what a doctor is. Jennifer: Then you think of the 144 trades, and how many can you name?

So how do we even begin to remotely explain what the trades are if a child or youth doesn’t grow up with it or see it in their daily life?

My 8-year old is talking about being a carpenter and a farmer right now, because he’s put it together; he knows, from friends of ours, that farmers do a lot of carpentry. So if he didn’t see that, would he know what a carpenter was? I would hope so, considering my job! Anthony, do you know what Industrial Millwright is?

Electrical Business: Aren’t you the ones who fix industrial machinery in plants?

Jennifer: Yes, that’s a pretty general description, but most people have no idea what that is. How do you explain it to an adult, a youth, or a child?

I’m a doctor for machines. When the machine is sick, I fix it. But I do troubleshooting, hydraulics, pneumatics. I do a little bit of machining and blueprinting. And plumbing. We’re a little bit of everything! But how do I explain that to a student in Grade 7 or 8, who is trying to make choices for their classes for Grade 12.

Students—even adults—don’t know these careers are out there. Again, there’s 144 of them! So there’s a lot of opportunity to showcase what’s out there. As Adam noted, making sure the pathway is clear and, as Andrew noted, the pathways are a little bit different.

Electrical Business: How will you measure the results of your efforts?

Adam: Some of the indicators we’re hopeful to see is the average age of apprentices lowering in the province. Right now, you’re hearing numbers between age 27 and 29. I was an apprenticeship instructor and training coordinator for nearly 10 years, and I saw many apprentices. At one point, when I was 26 or 27, I had people in my class who were at least a decade older than me. So I think a key indicator is to see that [average age] tick down. It will give us an indication that younger people are pursuing and starting careers in the skilled trades.

Jennifer: Going forward, we want to meet with a very large group of stakeholders, making sure we hear from parents, educators, training facilities, colleges, and employers—big, small and medium. They are all going to have a very different perspective.

Maybe the barriers are regional, maybe non-traditional… maybe stereotypes. But hearing about all the different barriers and knowing exactly what they are will help change them. We can put new practices or procedures in place to try to break the barriers and go after the stigmas, and bring more youth into the trades, including those that aren’t as well known.

Andrew: We’ve got a great team with the Ministry that’s going to help support us, and we’ve got a good process. We have a very robust consultation process, and stakeholders have already started to reach out to us. People want to talk about this issue.

I think I can speak on behalf of all three of us that we’re very honored to be part of this process and, hopefully, contribute something meaningful. We’re all passionate, and we want to do what we can to address some of the issues in the skilled trades and create new pathways, identify and reduce stigma, address the barriers… then wrap it up in a nice report for the Minister.

Obviously, as soon as we do that, we’d love it to be implemented the next day! Stakeholders (and that’s everybody—parents, youth, employers, unions, skilled trade workers, anyone under 30), we want to hear from you. We’ll be reaching out, and we hope you reach back.

To engage with Jennifer, Adam and Andrew, email youthadvisors@ontario.ca, or visit Ontario.ca.

This feature—along with other great content—appears in the February 2021 edition of Electrical Business Magazine. Even more back issues are located in our Digital Archive.