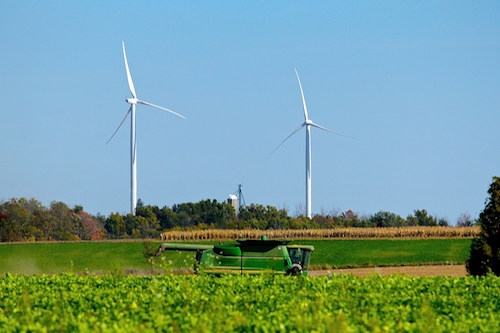 Two of the 10 turbines that make up the Gunn's Hill Wind Farm in Oxford County, Ont. Photo: Bullfrog Power

This facility consists of 10 turbines located in Oxford County, south-western Ontario, and involved the collaboration of OCEC, the County, the Six Nations of the Grand River and organizations that include developer Prowind Canada Inc. and Bullfrog Power.

The 18MW Gunn’s Hill Wind Farm is, according to the companies, “the first community-owned wind farm in Ontario and is now generating enough electricity to power more than 6000 homes in Oxford County”.

In September 2015, Oxford County, located between London and Kitchener-Waterloo, adopted a sustainability plan to achieve 100% renewable energy by 2050.

“Wind power plays a significant role in generating the renewably-powered future we want to achieve, which is why we’re proud to be supporting Ontario’s first community-owned wind farm,” said Ron Seftel, CEO, Bullfrog Power. “Thanks to the thousands of bullfrogpowered individuals and businesses across Canada, we’re able to provide funding to community-led projects that will have an impact on how our power is generated for years to come.”