News Photo Gallery
PHOTOS: “Next year will blow you away” • Milwaukee NPS2017 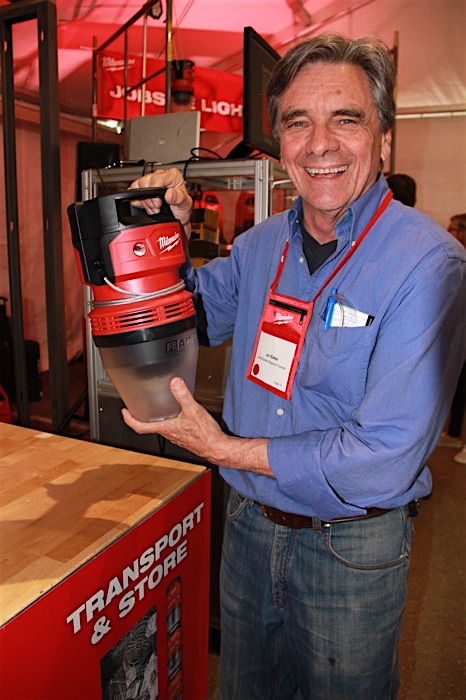 June 13, 2017 – “As much as tomorrow is going to be outstanding, next year will blow you away,” said Steven Richman, president of Milwaukee Tool Corp. to the crowd of media gathered on the eve of the Milwaukee Tool New Product Symposium 2017 at company headquarters in Brookfield, Wis.

Richman didn’t give any more clues as to what 2018 may hold but noted Milwaukee’s key to success is in its people, who “bleed red every single day” and help establish the company as a “solutions provider, not just a power tool company”.

The three-day symposium from June 6-8 was jam-packed with demos, tours and entertainment. Things kicked off with a tour of the Empire Level factory in Mukwonago, Wis., which was acquired by Milwaukee in 2014.

“We’re still in our revitalization phase,” said Steve Lallensack, director of operations at Empire Level, noting the recently replaced, made-in-America presses, new robo drills and how automated the plant has become since the acquisition. “We started with no robots in 2014. By the end of 2016, we had about 16 and by the end of 2017 we will have upwards of 20 here in the factory,” Lallensack said.

“Less than twelve months after the acquisition, we doubled our business,” added Rock Gray, senior vice-president and GM at Empire.

Empire showcased its first auto-calibrated digital level and new UltraView Torpedo LED level with “impact-resistant” electronics and a brightener built into the acrylic to “give it an extra pop”, the company says.

Day two brought the goods with hands-on breakouts, including a session on ergonomic improvements and the new Shockwave Lineman’s impact auger bits, 3-in-1 utility sockets and 7/16-in. hex to 1/2-in. square impact socket adapter for the utility field.

What else caught our eye?

The Radius line is also expanding, featuring a high-bay LED ideal for the temporary jobsite, as well as a M18 site light with a charger and OneKey option. This 9000-lumen product is cordless with two batteries but has the ability to input AC power with a standard extension cord and daisy chain multiple lights while in AC.

OneKey
The OneKey team, which is entirely based in Brookfield, Wis., has doubled since the last New Product Symposium, according to Steve Matson, a senior product manager at Milwaukee Tool. (OneKey is Milwaukee’s cloud-based, Bluetooth-enabled digital platform for tracking and logging jobsite tools, among other reporting features.)

“OneKey is where we can look at the 1+1=3 solution,” Matson said during the breakout.

The team says it is simplifying “the way locations get set up and managed” in the app as well as adding more features to Tool Tracking in order to view location history and obtain directions to a specific tool location. Geo-fencing and tool-activated notifications will also be coming down the pipe later this year.

“We’re projecting 600,000 OneKey app downloads by the end of this year,” Matson added.

For videos and more photos, scroll back on our Twitter feed to June 6-8.

* A big thanks to the folks at Milwaukee Tool—especially James, Jim, Amanda, Heather and Kharli—for organizing my trip and taking great care of me while in Milwaukee.