News
A solution to provide broadband internet to everyone? 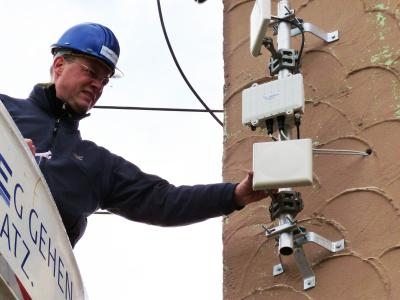 September 14, 2012 – John just loves playing soccer, and he’s really looking forward to the weekend game, which he’s agreed to organize. First, he needs to tell his teammates and friends about it, then he must rustle up an opposing team and find a referee – all of which will take him a considerable amount of time. In order to contact everyone, he’ll have to send countless SMS messages; he’ll have to make all the arrangements on his cell phone because he lives in a rural area in Zambia, and has no internet access.

But John’s village will soon acquire an eKiosk with a number of PCs to provide residents with access to email, chat, web browsing and internet telephony, thanks to WiBACK Wireless Backhaul Technology, developed by the Fraunhofer Institute for Open Communication Systems FOKUS in Berlin, Germany.

Researchers at the institute say they have succeeded in significantly reducing both the capital expenditure and the operating costs involved, meaning it is now possible to set up tailor-made IT infrastructures and communications networks away from the major towns and cities of developing and emerging countries and to connect those in rural areas to the World Wide Web.

WiBACK is a wireless network that uses existing technologies to build a far-reaching network of radio links using WiBACK routers. The system is designed to support all existing wireless technologies. The demands that will be made on the WiBACK network in the developing world are huge, said researchers.

“Our technology has to be reasonably priced, low maintenance, auto-configuring and robust,” said Karl Jonas, project leader at FOKUS. “It also has to bridge massive distances of several hundred kilometres. Should a router fail, data must divert automatically. And should an operating error occur, the system must be able to restore itself to normal operation. WiBACK fulfills all these requirements.”

Routers are installed on water towers, purpose-built masts or other similar high-lying points. Since the equipment has GSM and UMTS interfaces, the network is also suitable for mobile communications. WiBACK wireless networks are powered by solar cells, and are due to be rolled out to several countries in sub-Saharan Africa in summer 2012.

Jonas reported that “even schools and hospitals in sparsely populated areas will then be able to access the internet.” He and his team are assisted by ICT management consulting company Detecon, which drew up the business plan.

In the meantime, FOKUS researchers have already embarked on their next project– to ensure that infrastructure-poor regions within Germany will also benefit from these developments. The first pilot network is currently being built on the fringes of the Westerwald and will be used to test the network’s reliability when it is in continuous operation. For example, what will happen when a network hub fails, perhaps because of a power cut?

“We won’t be installing solar cells in Germany, since the electricity network covers almost the entire country,” said Jonas. Initially, he and his team will provide a remote farm in Hennef-Theishohn with mobile communications and broadband internet. To do this, they have set up a 21km-radio link between the Fraun-hofer-Gesellschaft’s existing fiber optic connection in Birlinghoven and the farm, using a local substation operated by energy supplier RWE as a relay point. WiBACK technology can also be employed during major events, such as soccer games, to increase the overall capacity of the mobile communications network for a set period of time.

In this connection, the researchers are keen to draw attention to the system’s energy consumption: “WiBACK will automatically register if a soccer stadium is full to bursting and increase the number of available network hubs accordingly,” said Jonas.

***
With files from Karl Jonas, Fraunhofer-Gesellschaft.