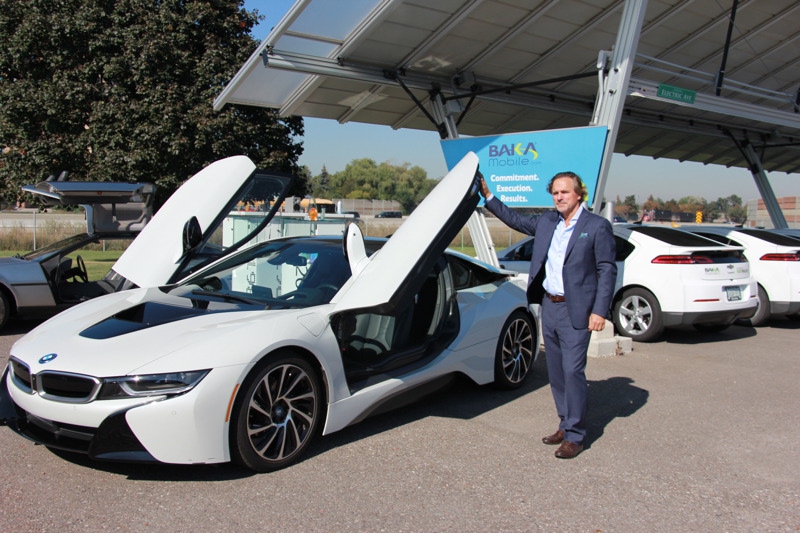 Baka president John Marion stands next to a 2015 electric BMW i8 on site during the company's 30th anniversary celebration. Photo R. Francoeur

September 24, 2015 – It was Back to the Future yesterday at Baka Communications’ headquarters in Etobicoke, Ont. as the wireless solutions company—which says it hosts the first and largest solar plug-in canopy for electric vehicles in North America—celebrated 30 years and the unveiling of a new addition to the canopy.

In honour of the milestone anniversary, Baka also announced it is donating the use of the land outside its corporate offices—just off Hwy 427 at Rathburn Road— to urban farmers at Fresh City, a local and organic food company. The land will house a 4000-sf greenhouse and surrounding field crops.

“We’ve always been committed to sustainable business practices that go beyond ROI,” said John Marion, president and founder of Baka.

In 2012, Baka installed its canopy in its office parking lot. The 20kW system has nine electric vehicle (EV) charging stations and is available for public use, free of charge. Any unused energy is fed back to the local grid.

The company revealed a new sign for the canopy at the event: Electric Ave., which also serves as a fun salute to the Eddy Grant song of the same name, Marion said.

“Our fleet is growing… One by one I’m trying to move my family and all our employees to EVs,” he added, while explaining the significance of the new sign.

About 100 people showed up for the anniversary celebration and a hot brunch from the company’s own restaurant (Baka Gallery Café), a tour of Electric Ave., and to take a seat inside an 1985 DeLorean (just like the one in the 1985 blockbuster Back to the Future) and a 2015 electric BMW i8.

It goes to show a lot can happen in 30 years.

Baka president John Marion stands next to a 2015 electric BMW i8 on site during the company’s 30th anniversary celebration.