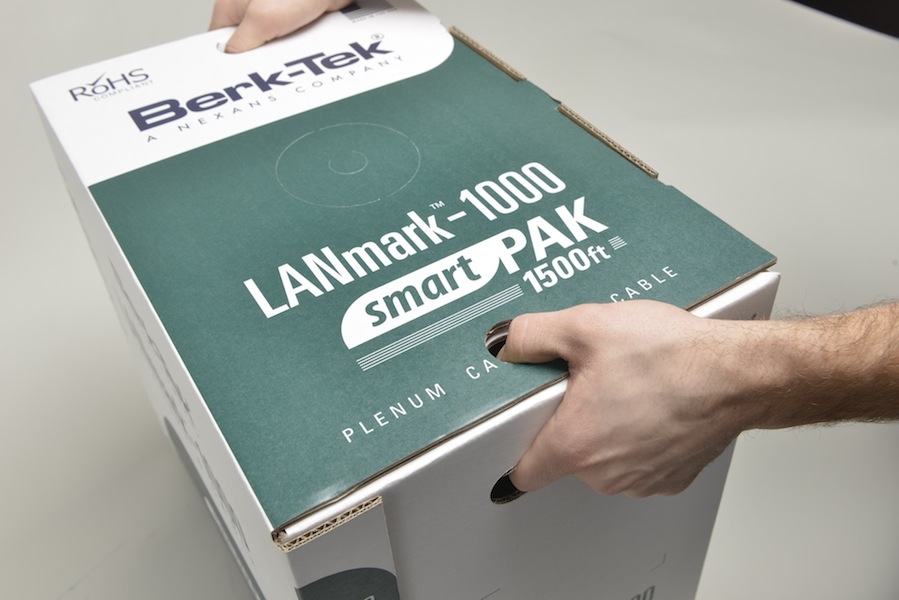 January 24, 2013 – Berk-Tek (a Nexans Company)—a copper and fiber optic cable technology and solutions player—unveiled its new 1500-ft UTP copper cable package option—smartPAK—at the BICSI Winter Conference this week. This package option will allow more runs out of one box of cable, says Berk-Tek, while substantially cutting the scrap. A standard 1000-ft box of UTP cable allows three 300-ft pulls (the maximum length allowed by the TIA-568-C standards), leaving 100 ft (10%) as leftover scrap, says the company, noting the smartPAK package allows multiple lengths of either 300 ft or 150 ft with no scrap. Because Berk-Tek’s smartPAK box contains 50% more cable, the box construction is made with additional reinforced, multi-layer corrugated cardboard for added strength. This reduces carton sagging and improves stacking, says the company. The smartPAK packaging option will begin shipping to distributors in February, and will include all of  Berk-Tek’s four core UTP products, in both plenum and riser versions: LANmark-1000, LANmark-6, LANmark-350, and Hyper Plus 5e.