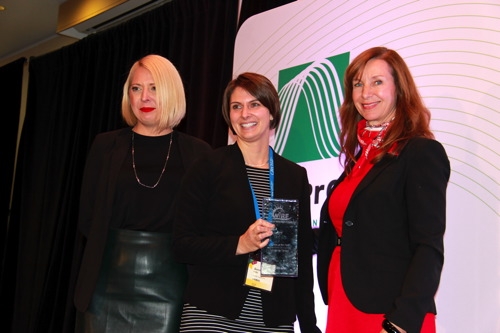 Hiltz, government relations and regulatory affairs advisor for Engie Canada, was dubbed Woman of the Year 2016 by WiRE (Women in Renewable Energy). The award was presented by WiRE founders and co-chairs Joanna Osawe and Rebecca Black, who noted Hiltz has been making waves in the energy sector for the past decade and serving on a number of boards.

Hiltz previously worked at the Ontario Ministry of Energy, digging her hands into the Green Energy and Green Economy Act, as well as the Ontario Power Authority (now the IESO).

“Tonight we are honouring one of the pioneers of project financing in the sector,” said Mike Bernstein, APPrO’s chair. “Someone who was one of the first to bring traditional financing to the emerging wind and renewable power sectors in Canada and the U.S.”

Bernstein went on to say, it is estimated the soon-to-be-retired Sutherland and his teams have been responsible for arranging or providing over $20 billion in financing over his career, and “over $10 billion of this to the benefit of independent power projects. That’s a lot of megawatts.”

The Hedley Palmer Award recognizes an individual who has made an outstanding contribution to the Ontario power industry, and has been given to a different individual each year since 1989. According to APPrO, it is the highest honour bestowed annually in the power generation business in Canada.

The conference, which featured a number of panel session and networking events, was hosted by APPrO in Toronto.