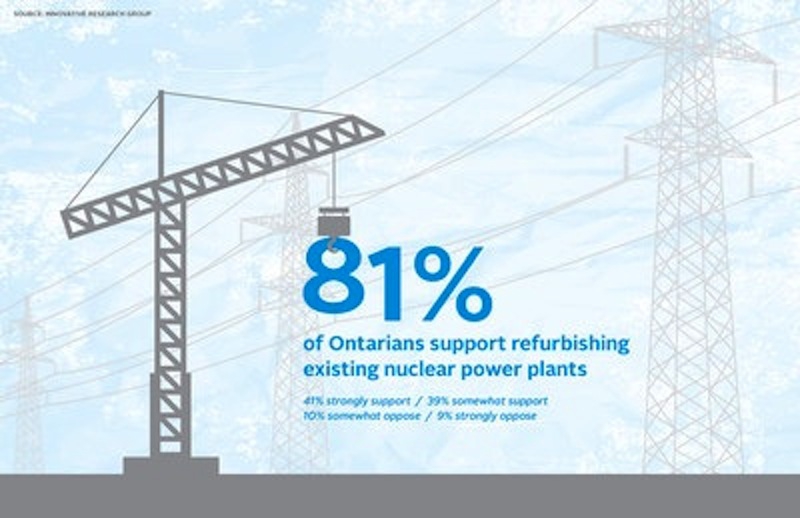 October 15, 2015 – According to Bruce Power, support for refurbishment of nuclear plants in Ontario has reached 81%, the highest level the company has recorded since it started public opinion tracking in 2001.

“It’s clear the nuclear sector is gaining public support,” said Greg Lyle, the managing director of Innovative Research Group, who conducted the most recent polling from Sept. 15 to 22. “Support for nuclear refurbishment is at majority levels across every region and demographic group throughout the province”.

The September poll concludes that 81% of decided Ontarians support refurbishment with over 40% strongly in support, compared to only 9% who strongly oppose—a nearly four to one ratio. In terms of geographic support, 79% of individuals in the Greater Toronto Area (GTA) and 82% outside of the GTA are supportive, meaning support is consistent across the province, Bruce Power said.

“We’ve been working hard to pro-actively present the facts about nuclear power on an ongoing basis given the role we play as part of a balanced supply mix,” said James Scongack, Bruce Power’s vice-president of corporate affairs. “When it comes to electricity, people tend to care about three things—high reliability, low cost and keeping the air clean—and nuclear power checks all those boxes.”

The survey was conducted by telephone and included approximately 600 randomly-selected Ontario residents, 18 years of age or older. After weighting a sample of this size, Bruce Power said the aggregated results are considered accurate to within ±4.0%, 19 times out of 20.