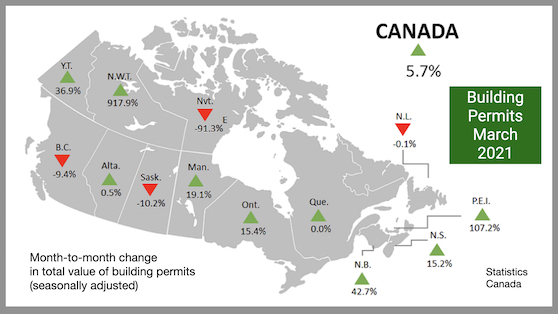 (Constant dollar estimates are available, for the first time, for the building-permit series dating back to 2011, adds Statscan. On a constant dollar basis [2012=100], building permits increased by 4.0% to $8.1 billion, a number only surpassed by the April 2019 value of $8.2 billion.)

Multi-family dwellings jumped 24.5% compared with February to $4.3 billion. This gain is largely the result of permits issued for residential towers in the cities of Toronto, Burlington and Vaughan.

Single-family homes also reached new heights, increasing 7.6% to $3.8 billion. The census metropolitan area of Oshawa, Ont., was responsible for just over 1/3 of this growth.

Following a month in which several major permits were issued for care facilities, institutional permits fell 33.5% to $732.1 million. Eight provinces posted a decline in this component, with Quebec (-54.5%) recording the most significant drop.

Commercial permits decreased 14.6% to $1.5 billion, about 25% lower than the average monthly value reported in 2019. After declining slightly in the first two months of 2020, commercial permits took a large hit at the start of the pandemic, and have since averaged around the $1.5 billion mark observed in March.

Industrial permits, the only component to report a gain in the non-residential sector, rose 16.4% to $650.5 million. Several major permits were issued, including a new relay control centre for railroads in the city of Montreal and the Rutherford Station of the Go Transit system in the city of Vaughan, Ont.

Three consecutive monthly highs led to a record-setting first quarter, up 12.7% to $31.2 billion compared with Q4 2020. Gains were reported in all components.

The first three months of 2021 were the highest-posted in the residential sector (+15.0%). Single-family homes (+22.8%) showed stronger quarterly growth than multi-family dwellings (+8.3%), and both reached new heights by breaking previous records set in Q4 2020.

Despite rising 7.5% in the first quarter to $9.1 billion, construction intentions for non-residential buildings have not fully recovered from the effects of the pandemic, remaining well below the peak of $10.6 billion set in the fourth quarter of 2019.