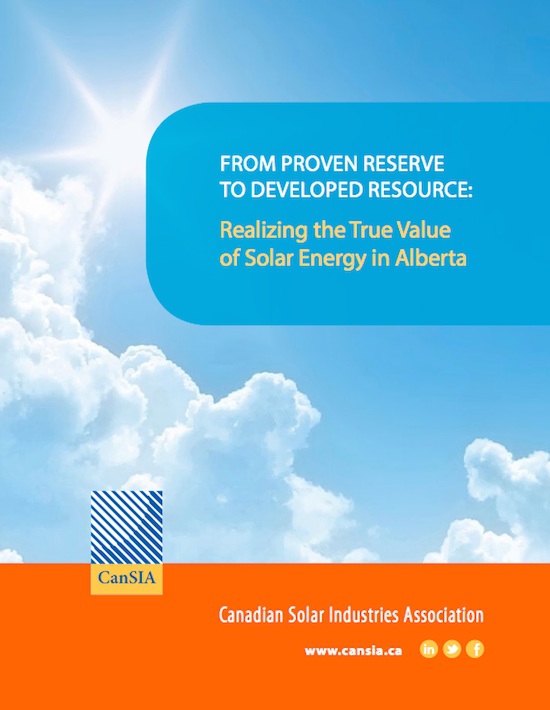 “This is a ‘Made in Alberta’ blueprint designed to round out the province’s electricity system,” said John Gorman, CanSIA president and CEO. “Alberta is clearly a leader in oil and gas; these recommendations pave the way to making it a leader in renewable energy as well.”

“As the province proceeds to retire its coal fired power plants, it will need an additional 7000MW of new power generation. Solar energy can play a significant role in providing consumers with a clean alternative,” noted the association.

The paper outlines recommendations “that would ensure a meaningful role” for solar energy in the province’s electricity mix. A strong solar energy market means:

“Alberta has before it a great opportunity to embrace the huge benefits of solar,” said Gorman. “The sun shines in Alberta more than in any other province, and Albertans understand the value of a strong energy resource. We’ve been talking about it for years; it’s now time to move forward.”

CanSIA is urging the government to present its framework so that planning for the future can begin immediately. It recommends that the Government of Alberta:

• Introduce a renewable and alternative energy framework that charts the path for a minimum of 1.5% of Alberta’s electricity demand to be met by solar in 2022.
• Enhance its micro-generation regulation by increasing the price paid for exported solar electricity to reflect an appropriate market value which would enable Albertans to realize a fair value for the solar electricity they generate.
• Introduce a Climate Change and Emissions Management Fund (CCEMF) program that targets accelerated adoption of solar in the residential and non-residential sectors with “Clean-Energy-Adders” to support the mandate of the Climate Change and Emissions Management Corporation (CCEMC) while longer-term policy solutions are developed.
• Introduce an Interim Demonstration Pilot Program for large-scale solar to give rise to 150MW build capacity and overcome regulatory barriers before long-term policy is finalized.