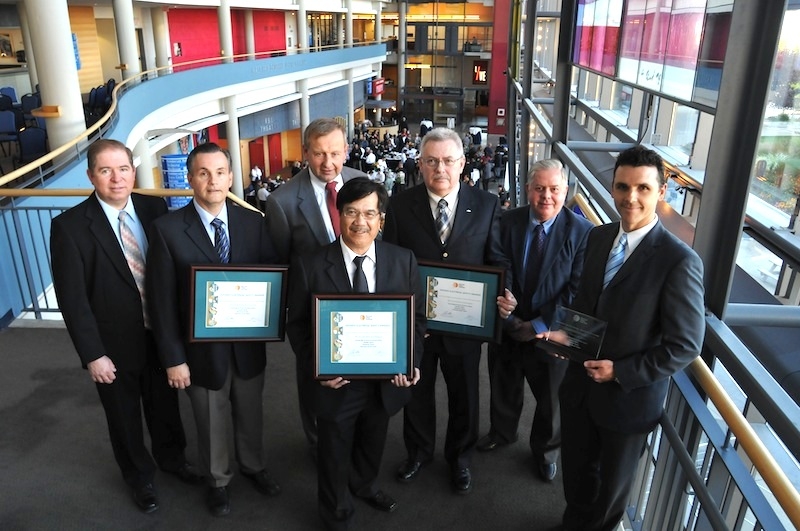 “We are on a mission to eliminate electrical fatalities and serious injuries in Ontario and these people and organizations exemplify the leadership and effort needed to achieve that goal,” said Peter Marcucci, Electrical Safety Authority (ESA) chief public safety officer. “We’re very pleased to have an awards program that formally acknowledges the contributions of so many others working towards the same goal.”

Of particular note are Cambridge North Dumfries Hydro, Guelph Hydro, Kitchener Hydro and Waterloo North Hydro, who joined forces to improve safety awareness by educating workers and the public of the hazards associated with electrical equipment and systems. Their efforts target those who are most at risk by providing electrical safety knowledge in schools, and by using children’s safety villages, sharing electrical safety and powerline safety information with first responders and construction trades, and reinforcing safety practices of local electrical contractors.

Also of special note is Entertainment Electrical Safety Committee of Ontario (EESCO) for responding to electrical safety concerns associated with the unique needs of the entertainment industry in Ontario. EESCO spearheaded the definition and promotion of standards and guidelines to address grounding requirements for portable generator sets used in the film and event sector. Recognizing the importance of consistent application of electrical installations, EESCO worked with the Ministry of Training and Colleges to establish training and certification requirements for Entertainment Industry Power Technicians. This has allowed EESCO to advance the standards associated with safe electrical installations and connections to protect workers and the public.

The awards were established by the Electrical Safety Authority to acknowledge the contributions made by people and organizations to reduce electrical fatalities, injuries and loss. Ontario’s deputy minister of consumer services, George Ross, and Mississauga mayor Hazel McCallion joined John Wiersma, ESA’s chair, and David Collie, ESA president and CEO, in handing out the awards.