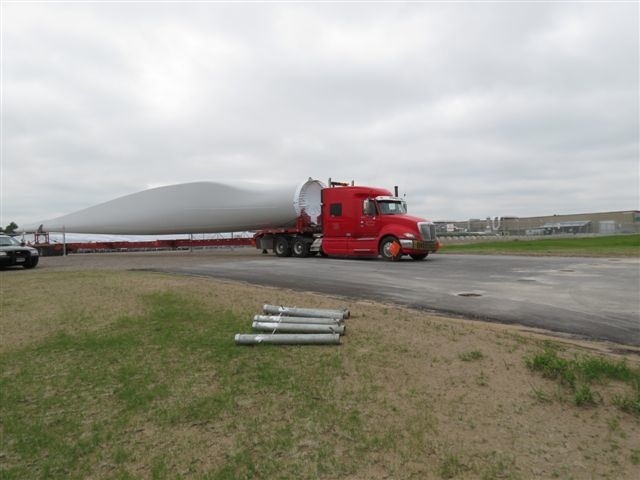 July 5, 2013 – Siemens has officially shipped its first Made-in-Canada wind turbine blade from its manufacturing facility in Tillsonburg, Ont. After a send-off from employees, the 49-m blade left the plant and made its way along area highways to Chatham-Kent, where it will be used in the commissioning of the South Kent Wind project.

“There’s a real energy and sense of pride among our employees to see the first blade leave the plant,” said Jacob Andersen, vice-president Wind Power, Siemens Canada Ltd. “We look forward to helping bring renewable energy to homes in the province, new jobs to Canadians and continued investment and economic development to our communities.”

This first blade is one of 372 blades to be employed in the commissioning of 124 SWT-2.3-101 wind turbines at South Kent Wind as part of the 270MW agreement between Siemens and Samsung Renewable Energy Inc. and Pattern Energy Group LP.

Siemens says the blade production ramp-up highlights the positive impact the Green Energy Investment Agreement (GEIA) has made on manufacturing in Ontario. The 253,000-sf Tillsonburg plant was a former Magna International location that originally opened in 1975 and had been vacant since 2008. The building was overhauled in 2010 by Siemens to set up its home of turbine blade production, which currently houses more than 200 employees.