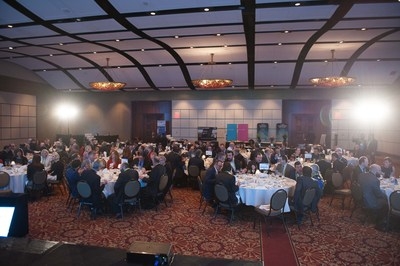 April 5, 2017 – The Canadian Wind Energy Association (CanWEA) has announced the recipients of the 2017 CanWEA Awards, which “honour industry leaders, innovators and supporters for their exceptional work on behalf of wind energy”.

• Friend of Wind Award: Randy Hope, mayor of the Municipality of Chatham-Kent in Ontario, for “his commitment to sustainable economic development and job creation has made the municipality a wind energy leader.”

• Matt Holder Community Connection Award: Adam Rosso, the director of development at Boralex Inc., and who was involved in the planning and execution of nearly 1500MW of wind energy projects.

• Individual Leadership Award: Jimmy Royer, former senior technical advisor, Natural Resources Canada, for playing “a key role in the development of policies and programs that have not only helped drive the rapid growth of wind energy in Canada so far, but have also laid a foundation for its continued expansion.”

• Group Leadership Award: Government of Alberta, for its plan to phase out coal-fired generation and add 5000MW of new renewable capacity to its grid by 2030.

“More wind energy has been installed in Canada over the past 11 years than any other generating technology,” said Robert Hornung, president, CanWEA. “That’s an amazing accomplishment, and one that would not have been possible without the vision, creativity and commitment of people like CanWEA’s 2017 award winners. They have helped make wind energy the success story it is today, and we are honoured to recognize and celebrate their contributions.”

The CanWEA Awards Dinner was held April 4 in conjunction with the annual CanWEA Spring Forum 2017.

Since the CanWEA Awards were established in 1985, more than 50 advocates, individuals and companies from across Canada have been recognized.