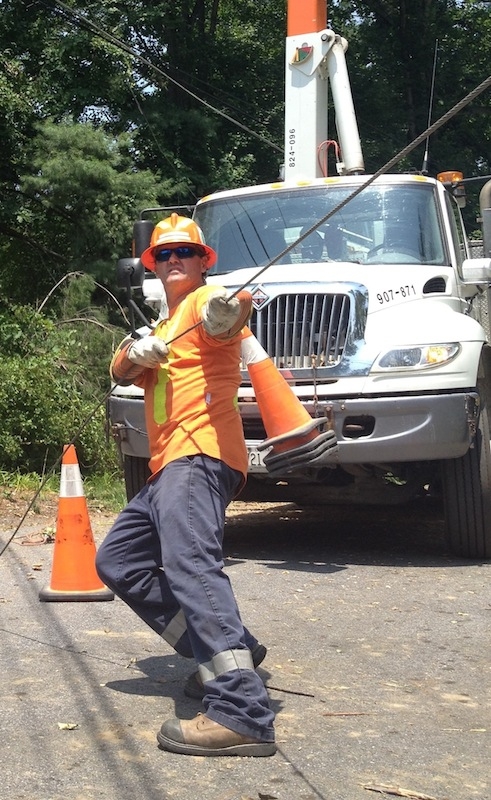 January 12, 2013 – Hydro One was awarded one of the Edison Electric Institute’s 2012 Emergency Assistance Awards for supporting the recovery efforts from the June 2012 Mid-Atlantic and Midwest derecho, and Hurricane Sandy. Photos below!

“Our employees’ skills and experience were needed in these difficult situations and we are proud that we were able to respond,” said Carmine Marcello, president and CEO, Hydro One. “Hydro One and the electricity sector have a longstanding shared history of responding in situations like this. We all know that timely restoration of electricity is critical to the health and economic well-being of our communities.”

On July 1, 2012, 200 Hydro One employees travelled to Washington, D.C, Baltimore, Md., and Virginia after the derecho passed through the region and knocked out power to more than 3 million homes and businesses. Then, on November 1, 2012, the utility dispatched 225 employees to Long Island, N.Y., to assist in power restoration efforts after Hurricane Sandy knocked out power to millions of residents.

Hydro One has reciprocal agreements in place with North American utilities to provide assistance during significant power outages. In mutual assistance situations, all costs are covered by the utility receiving the help.

The Edison Electric Institute (EEI) is the association of U.S. shareholder-owned electric companies. Hydro One owns and operates Ontario’s 29,000-km high-voltage transmission network, and a 121,000-km low-voltage distribution system. It is wholly owned by the Province of Ontario.

(Note: EBMag contacted the Edison Electric Institute to learn of any other Canadian utility award winners. We’ll keep you posted.)

Photos 7-11: Hydro One crews prepare to cross the U.S. border on their way to help restore power to Long Island, N.Y., in the early morning hours of November 2, 2012. (Courtesy Hydro One.)