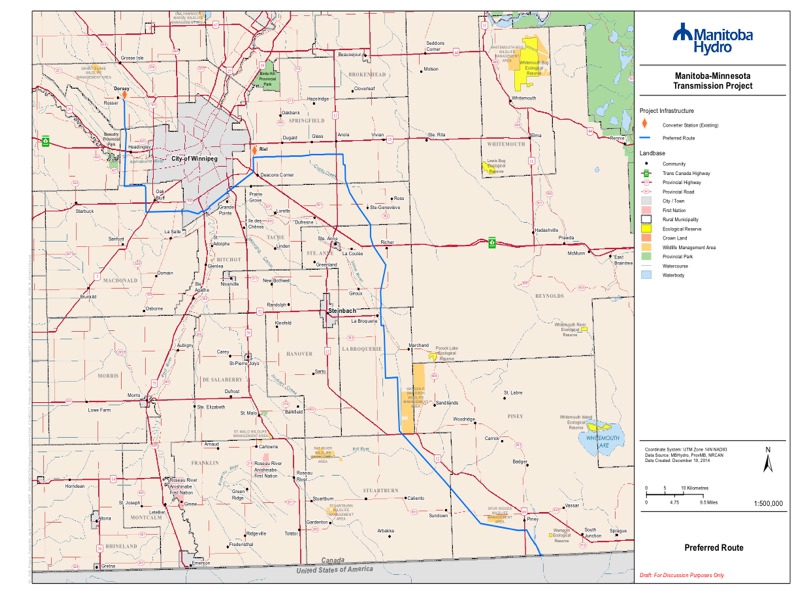 January 21, 2015 – Those living in Winnipeg as well as in Southeastern Manitoba will have to opportunity to see and comment on the preferred route for the Manitoba-Minnesota Transmission Project in a series of public open houses scheduled for February and March.

“Based on feedback received from two previous rounds of public engagement and our ongoing environmental assessment, we have determined a preferred route that we are presenting to the public for input,” said Shannon Johnson, Manitoba Hydro’s Manager of Transmission Licensing and Environmental Assessment.

“Information and feedback gathered during the upcoming months will help to determine the final placement of the route and will contribute to the completion of the environmental impact statement,” added Johnson. “The final preferred route will be submitted this summer for regulatory approval to Manitoba Conservation and Water Stewardship and the National Energy Board.”

The Manitoba-Minnesota Transmission Project is needed to both export surplus electricity and enhance the reliability of the province’s electricity supply in emergency and drought situations. The 500-kilovolt alternating current line will originate at the Dorsey Converter Station—located near Rosser, northwest of Winnipeg—and travel south around Winnipeg. From southeast Winnipeg, the transmission line will continue south, crossing the Manitoba-Minnesota border south of Piney, Manitoba, and connecting to the Great Northern Transmission Line, which will be constructed by Minnesota Power.

The open houses will run from 3 to 8 p.m. on the following dates and locations:

Questions concerning the open houses and the project can be addressed to mmtp@hydro.mb.ca or the project phone line 1-877-343-1631. Visit www.hydro.mb.ca/mmtp for more information.