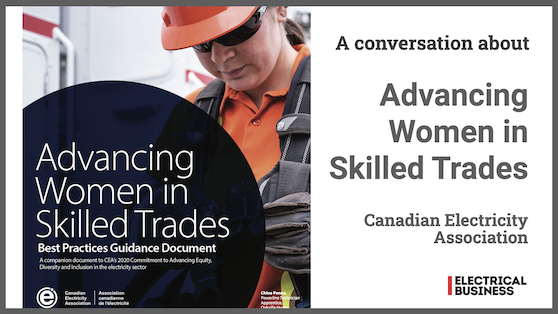 June 15, 2021 – The Canadian Electricity Association published “Advancing women in skilled trades – best practices guidance document” back in March 2021, but the work on that document started long before then.

And with good reason: female participation in the skilled trades among electric utilities remains painfully low: approx. 10% nationally, says CEA’s Justin Crewson, and, for powerline technicians, it’s between just 1% to 2%.

This guidance document, then, represents the effort undertaken to codify best practices, programs, and policies currently in place at CEA member utilities.

Joining Electrical Business Magazine to talk about this document, and some of the lessons learned, are Manitoba Hydro’s Angela Driver and Hydro Ottawa’s Lyne Parent-Garvey, who both served on the project steering committee; and the aforementioned Justin Crewson, who served as project manager for the document. 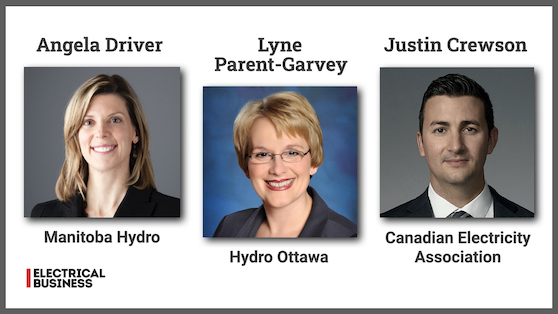 We discuss the imperative behind the report, and highlight some gender-equity best practices in the realms of recruitment, training, tools, role models, etc., from Manitoba Hydro, SaskPower, Alectra, Hydro One, Hydro Ottawa, and Hydro-Quebec.

I also asked my panel whether they had any preconceptions at the start of the guidance document process, and had they changed by the end. Ultimately, the document is only a starting point, which begs the question: What comes next?

For Parent-Garvey, that answer is simple. “Once we’ve done all this work,” she says, “[I hope to see] a little girl in Grade 2 or 3 that draws a picture of a female powerline technician [to show] what she wants to be when she grows up. And once we see that on primary school walls, we’ll have done our job.”

And check out Justin’s article Perspectives from a recently enlightened male at EBMag.com.