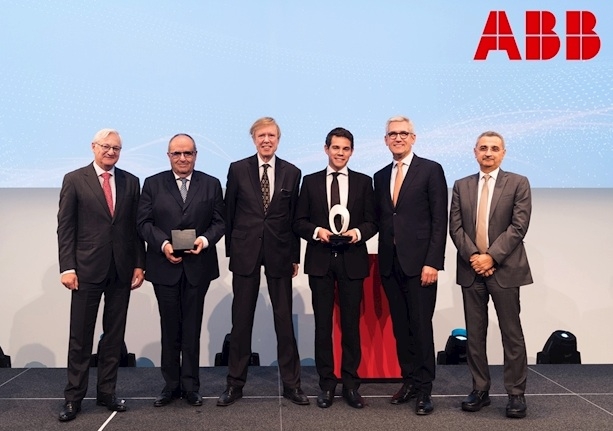 October 24, 2016 – Jef Beerten, of the University of Leuven (KU Leuven) in Belgium and EnergyVille, is the first recipient of the ABB Research Award in honour of Hubertus von Gruenberg, worth $300,000 US.

At a ceremony in front of over 100 international researchers, Beerten was recognized for his doctoral thesis, “Modeling and Control of DC Grids”, selected from 69 global applicants. Dedicated in honour of former ABB chairman Hubertus von Gruenberg, the award recognizes outstanding academic work in energy and automation, ABB says, and is accompanied by one of the highest research grants of its kind. It will be given every three years.

“We’re happy to support path-breaking research connected to the energy and fourth industrial revolutions,” said ABB CEO Ulrich Spiesshofer. “I congratulate Jef Beerten, whose work stands out for its applicability to real-world problems in the field of power and automation.”

According to ABB, Jef Beerten’s dissertation offers new insights into phenomena governing the stability of high-voltage direct current (HVDC) grids interacting with existing HV alternating current (HVAC) grids. He has devised new tools, models and methods for designing and controlling meshed HVDC grids, which use fast-switching power electronic converters for AC-DC conversion in order to improve the understanding of how today’s HVAC grids will interact with future HVDC grids.

“I am proud and delighted to be able to accept this exceptional award,” said Beerten. “I would like to thank ABB for the grant and this unique opportunity to continue my work in the field of electric power systems. This new research challenges previous approaches to modeling, controlling and operating electrical grids. It reminds us that we have to embrace these changes by challenging existing paradigms and thinking outside of the box.”