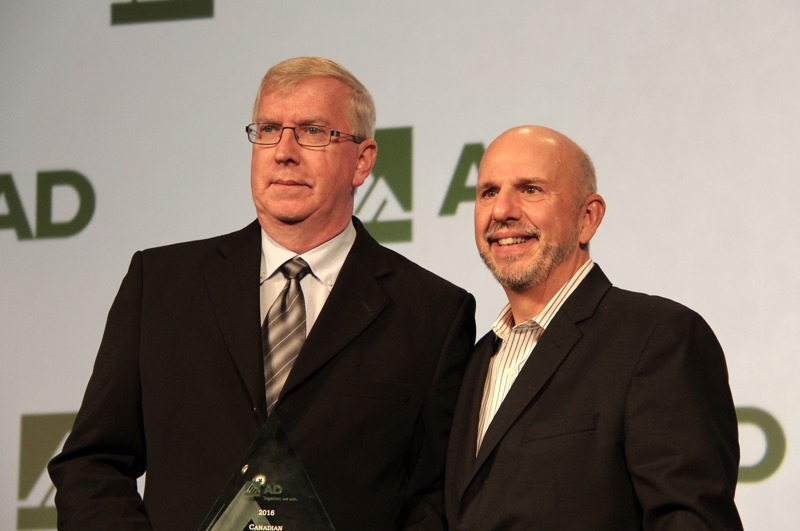 October 24, 2016* – EBMag recently returned from the 2016 North American Meeting of Affiliated Distributors’ Electrical Supply Division (NAM ESD) where we celebrated this year’s cream of the crop at the Spirit of Independence Awards dinner. Congratulations to the following Canadian distributors and suppliers:

Canadian Member of the Year for Performance (over $10 million)
• WINNER: Bird Stairs (New Brunswick), Photos 4 and 13

Canadian Member of the Year for Performance (under $10 million)
• WINNER: Source Atlantic (New Brunswick), Photos 2, 3 and 14

Canadian Supplier of the Year for Performance (over $5 million)
• WINNER: Liteline Corp., Photos 7 and 10

Canadian Supplier of the Year for Performance (under $5 million)
• WINNER: First Alert Canada (BRK), Photos 5, 6 and 12

Supplier of the Year for Marketing Excellence
• WINNER: Philips Lighting Canada, Photos 8, 9 and 11

With over 3800 branches from 550+ independently owned members, Affiliated Distributors says it is North America’s largest marketing/buying group for construction and industrial supplies. It has achieved annual sales of $32 billion US across seven industries and three countries.

Some important 2017 dates!
Mark your calendars now for some key AD 2017 dates:

• AD Electrical Supply Division’s next North American Meeting is slated for September 25-27, 2017, at the Gaylord Texan Resort in Grapevine, right outside Dallas.

— Photos A. Capkun. See yourself in here? Want a copy? Email acapkun@annexweb.com •