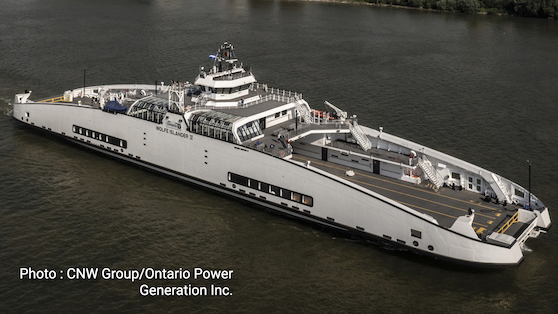 Both of the open-deck vessels are equipped to be fully-electric, says Damen, but also have twin diesel generators to allow hybrid and full diesel propulsion for maximum redundancy. The craft are fully operational down to -25 C.

The vessels departed Damen’s Galati Shipyard yard on August 26 on the Super Servant 4—a semi-submersible transport vessel—for their Atlantic crossing. They made their way to Quebec City for offloading and to be certified by Transport Canada, after which they will sail up the St. Lawrence River to the Kingston, Ont., area.

The delivery of these vessels marks the completion of the first of the two stages of the project, says Damen. The second stage involves the facilities that will enable the vessels to use shore power, which is supplied via integrated shore charging and mooring systems. This will enable the craft to recharge while loading and unloading between crossings.

This involves not only the installation of the necessary transmission infrastructure at each of the four ferry docks, but also the complete rebuild of the docks to accommodate the new vessels plus the onshore electrical equipment.

“The clean electricity we produce—combined with our extensive experience with large infrastructure projects—position OPG well to assist in the transition toward decarbonization with tangible projects like electrification of these two ferries,” said Ken Hartwick, OPG’s president & CEO.

The vessels will use a fully automatic charging system developed by Wabtec Stemmann, with features that include motion compensation to ensure a stable connection between the ship and shore, even in rough waters. Delivering 6 MW of power, charging takes 10 minutes.

Once terminal infrastructure is complete, the craft will become the first fully-electric ferries, completing their trips with onboard battery propulsion, says OPG.

“This integrated project is the first of its kind and one that we hope will demonstrate that fully-electric ferries of this size are a viable proposition,” said Leo Postma, Damen Americas. “It has been a pleasure working with the Government of Ontario to bring this project to fruition, and we very much look forward to seeing it fully operational. This is the future!”

Damen says it is establishing a service hub in British Columbia to provide long-term support to the Canadian market. In fact, the company is currently midway through a programme to build and deliver six Damen Road Ferries 8117 E3 for BC Ferries. While presently fitted with hybrid propulsion systems, they are designed to be adapted for full electric propulsion in the future.