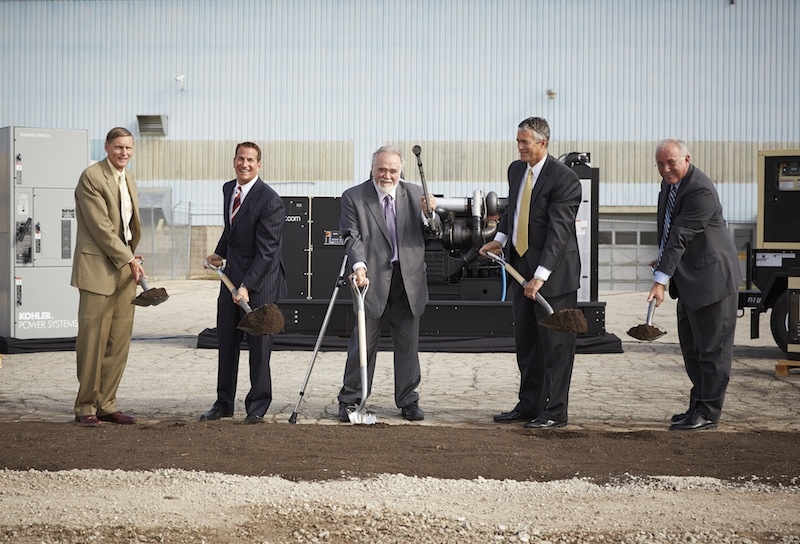 August 30, 2013 – Yesterday, Kohler Power Systems conducted a ceremonial groundbreaking on a 100,000-sf addition to the company’s manufacturing plant in the Town of Mosel (north of Sheboygan, Wisconsin). Congratulations!

When this expansion is complete early Spring 2014, the Mosel plant will focus on industrial and light commercial generators for a range of business applications, including hospitals, data centres, water treatment plants, cell phone towers, and small businesses like restaurants, gas stations and convenience stores.

Herbert V. Kohler Jr., chair and CEO of Kohler Co., opened the event by sharing the history of Kohler’s power generation business, which began in 1920 when the company developed the Automatic Power & Light—a genset for the farm community that turned itself On/Off automatically based on the demand for electricity.

“We have more than outgrown our current space,” noted Kohler Power Systems president Larry Bryce while discussing improvements planned for the Mosel plant. “We expect the power generation industry and our share of the market to continue to grow. With the additional space, we will reconfigure our production lines, expand capacity and centralize production of large industrial generators at this facility.”

Meantime, the company’s plant in Saukville, Wisc., will become the production facility for residential automatic standby generators. In the next three years, the company expects to hire 300 additional associates between its two facilities in Mosel and Saukville, and its engine plant in Kohler, Wisc., which supplies the engines used in Kohler’s small and mid-sized generator models.