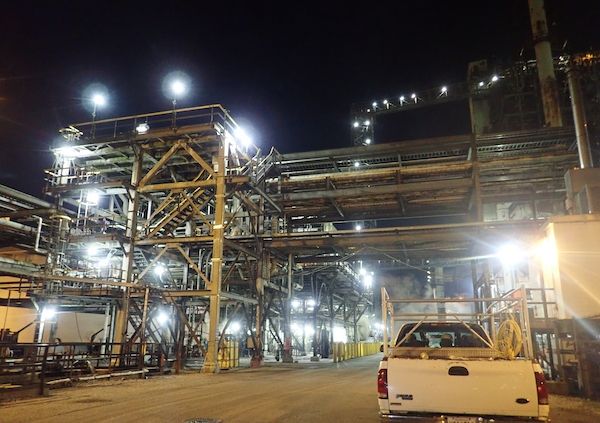 June 17, 2019 – In recent years, LEDs have increasingly been adopted as the industry standard for many commercial-grade lighting applications, from outdoor signage to hotel lobbies to towering office buildings. While it may be less obvious to most people, they have also gained ground with industrial-grade models for hazardous locations.

“LEDs are changing everything in our industry, particularly due to their energy savings compared to traditional lighting,” says Marty Cole, manager of harsh and hazardous industries for Hubbell Canada, which manufactures a wide range of electrical products for industrial applications. “We were pushed down this path 10 to 15 years ago by petrochemical companies that, despite the high costs of LED products at the time, wanted the technology to support ‘green’ environmental initiatives.’”

Over time, the costs came down. Today, LEDs comprise the majority of Hubbell’s sales of lighting products for hazardous locations.

“We still provide some high-intensity discharge (HID) products, such as for areas where it is too hot,” says Cole. “LEDs do not perform well in higher ambient temperatures, which is why, for example, they are generally not used in dryers or ovens. LEDs can also encounter issues with extremely low temperatures, such as in Arctic oil operations, just as many other electronics would.”

That said, another advantage of LEDs is the lower amount of heat they emit.

“LEDs are a helpful advance for hazardous locations because they create less heat,” says Brian Astl, president of Lind Equipment, which specializes in portable electrical products for hazardous workplaces, including lighting, cable reed and cords, ground fault circuit interrupters and static bonding and grounding. “You do not want to ignite the gas around you. An incandescent or metal halide light burns hot, so it requires a very large enclosure to dissipate the heat. Now, with LEDs, a smaller enclosure can pump out more light.”

“For areas where high vibration is a problem, such as drilling rigs, customers love LEDs because they don’t break or fall apart as easily as traditional lighting products do,” says Cole. “Of course, the actual performance really depends on how well a fixture is designed. It must be tailored to the application.”

Addressing risks
Lind, for its part, designs portable lighting systems for Class 1, Division 1 locations, where combustible gases and dust may be present. In these locations, the light fixture’s housing must be able to contain an explosion to prevent igniting the surrounding atmosphere (unless it is an intrinsically safe low-voltage product, such as a battery-powered LED flashlight).

“We shy away from manufacturing for Division 2 areas because someone could easily move a portable light from there to a Division 1 area without reading the label,” says Astl. “Some manufacturers will take a product that’s approved for Division 2, but intended to be a permanent fixture, and stick it onto a portable base. This is a problem because they way you construct a fixture is different from a portable light in terms of its durability. Different tests apply for CSA approval. Electricians need to be aware of this and check the file number. There is fraud out there that endangers people.”

The certification process, meanwhile, has had to catch up with technological advances in new product development.

“In the past, CSA standards for hazardous locations did not address portable lighting,” Cole explains. “The recent update of CSA C22.2 No. 137 includes requirements for these products that are similar to UL requirements, but neither standard addresses Class 1, Division 2. There’s a demand for portable lighting in Zone 0 hazardous areas, such as for tank inspections, which is difficult to meet at the moment. It has been fairly difficult to certify traditional lighting fixtures for hazardous locations, but with less heat generated, it is much easier to certify LEDs, especially for Zone 2, Class 1, Division 2 locations.”

Revolutionizing design
Another area that is still catching up with new technology is system design, which tends to remain more traditional than the lighting it incorporates.

“We’re still coming to grips with how to design lighting systems differently,” says Cole. “LEDs mean we can use smaller cable sizes, longer cable runs and smaller panel boards, because an LED consumes less power than other lamps and, thus, we can put a lot more lights on the same circuit. So, we often talk with engineering firms about ways they might change the way they design lighting systems. No one really used to think about that for hazardous locations.”

“The old form factors were designed around the old constraints,” says Astl. “While you were very limited in what you could do with traditional lighting, with LEDs we can change a design’s shape and the way light is dispersed. As a result, you’re seeing hazardous location lighting becoming brighter and easier to redirect. We design by listening to what our customers say would be better for them.”

These changes can reflect both practical improvements and reductions in cost.

“LEDs are still a little more expensive than HID, but you more than make up for that through the design,” says Cole. “Using smaller cables can significantly reduce project costs and with longer cable runs, it becomes easier to locate panelboards or controls in non-hazardous areas. Companies may still want have controls within the hazardous area to make it easier for the users, but there are ways to do that, too.”

“Usually, you run a long, explosion-proof extension cord and plug it in somewhere outside the hazardous area,” echoes Astl, “and this is easier with LEDs due to their lower amperage draw and wider range of voltages. Even if you get a voltage drop over the distance, an LED can handle it. You’re typically not plugging into a generator except in very remote working environments.”

So, while LEDs’ primary selling points for the industry have been the same as elsewhere—including low energy consumption, longer life, voltage versatility, durability and ease of use—they also offer the potential to improve hazardous location lighting beyond previous expectations.

This article originally appeared in the June 2019 isssue of Electrical Business magazine.
Print this page