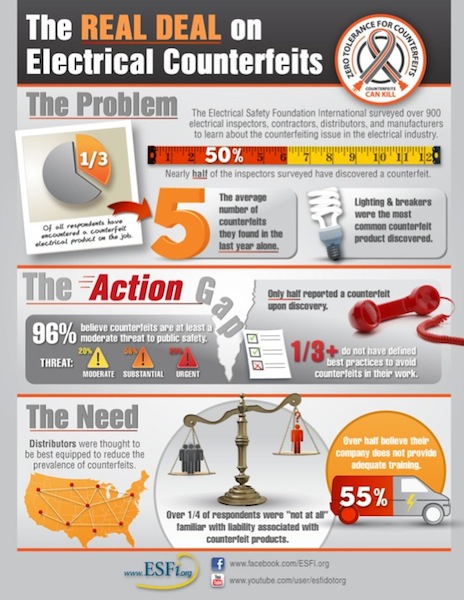 June 25, 2014 – U.S.-based Electrical Safety Foundation International (ESFi) has released the results of its 2014 Counterfeit Electrical Products Survey, and an overwhelming 96% of respondents believe counterfeits are—at the least—a moderate threat to public safety… yet only half reported a counterfeit electrical product upon discovery.

ESFi says it utilized partner organizations to provide a sampling across all sectors of the electrical industry, including:

A majority of respondents reported they do not have a process in place for reporting counterfeit product. Other key findings include:

• Almost 55% of respondents believe their company does not provide adequate training about the issues related to counterfeit products.
• Lighting, breakers and Other items (e.g. appliances, signs, ground rods) were the most frequently reported counterfeit products discovered.

“Effectively combating the counterfeit electrical product problem will require a collaborative effort among stakeholders from all industry sectors as well as cooperation from consumers,” said Evan Gaddis, president and CEO, NEMA. “We commend ESFi for spearheading this important effort and for uniting industry stakeholders to help champion this important cause.”

The complete results of ESFi’s 2014 Counterfeit Electrical Products Survey are available below for download, including the infographic highlighting key findings.