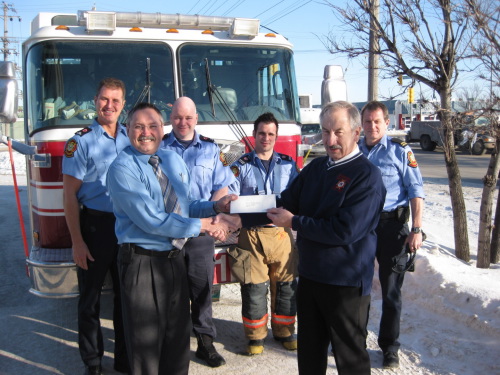 The Manitoba Electrical League (MEL) annual general meeting and charity dinner underwent a major face-lift this year, says executive director Dave Foreman, “and the results were nothing short of spectacular”. Attendance was up 16% over last year, and 15 companies who had not purchased tickets previously bought them this year.

The
event was held at Club Regent Casino in Jaguars Dance Club and featured
popular local tribute band, “Free Ride”, as well as Anders Magic, a
silent auction and a draw for a $4000 travel voucher. The silent
auction raised $7700 for the Firefighter’s Burn Fund, and the winner of
the  travel voucher was Ken Johnson of Electro-Tech.

MEL also
extends a thanks to Randy Knutson and his AGM committee (comprising
Dale Hendry, Garry Pestaluky and Louis Boisjoli) for their effort.

Photo:
MEL AGM chair Randy Knutson presents Martin Johnson of the Burn Fund
with a cheque for $7700 as one of Winnipeg’s firefighting crews looks
on.