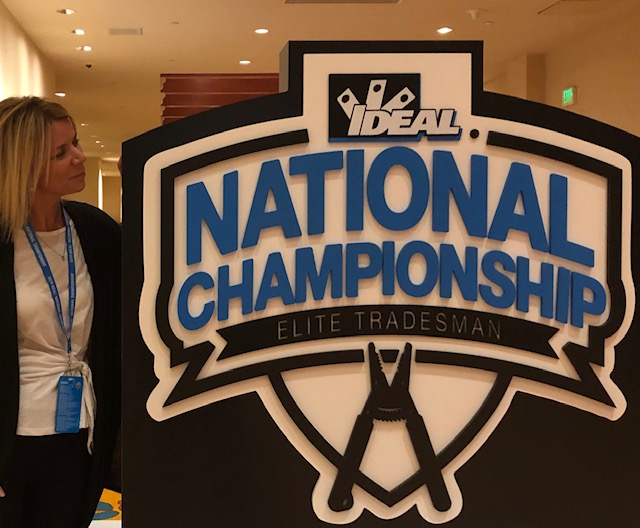 From Nov. 7 to 9, the Ideal National Championship took place in Orlando, Fla., bringing together 162 high-caliber professionals and students/apprentices in the electrical industry looking to demonstrate their skills.

The Ideal National Championship was created to showcase and honour the capabilities of professionals and students/apprentices in the electrical field in the United States and around the world.

For the first time this year, the event spread internationally, and more than 55,000 electricians from five countries were on hand to qualify for a chance to participate in the championship. Selected entrants competed for more than $600,000 in cash and prizes throughout the weekend!

It was therefore in a very euphoric atmosphere, surrounded by the leaders and employees of Ideal Industries, as well as all the families of the participants, that I had the chance to attend this event. What a stimulating weekend for all the people who were there!

For the 2019 edition, 18 Canadian electricians and apprentices were invited to demonstrate their skills for the chance to win the National Champion title and a prize of US$75,000.

The competition consisted of four rounds for both individual professionals and students/apprentices. Before each round, the participants had only 10 minutes to read the instructions and immerse themselves in the plan of the electrical installation to set up.

Once the bell sounded, electricians launched a race against the clock to measure, install, cut, mount and more to deliver a flawless electrical installation.

Despite the fact that some had their best time, the experienced judges selected the winners based on different criteria, including NEC requirements, consistency of work, details of the installation of the panel, cuts, stability, circuit, safety and more.

While all the participants of the event are already considered champions just by being selected to participate, only one can be the overall winner of the event. Congratulations to Greg Anliker of Kellengerner Electric, Elgin, Ill., the grand prize winner of the Ideal National Championship 2019 in the Individual Professional category. He won the prize pool of US$75,000.

The Canadian competitors were:

Special recognition goes out to Zach Agombar of Clinton, Ont., a competitor in the Student/Apprentice category, as the first Canadian to reach the semi-finals.

For the international competition, Paul Hannania of Calgary, Alta. represented Canada. After his second year of competing in the championship, Paul can be very proud of his title of “fastest Canadian.” He has already said he is ready to return next year!

Click here to see all the winners of the competition.

Invited to attend by Ideal Industries, a number of the participants’ family members were on hand to encourage their favourite competitors. Moreover, Ideal’s employees further advocated for a warm, family atmosphere.

I had the opportunity to talk with Meghan Juday, Ideal’s non-executive vice-president, about the company’s vision of the importance of the family on a daily basis.

The next Ideal National Championship is set to take pace in Nashville, Tenn. But before then, don’t forget to tune into ESPN2 on Dec. 15 at 8 p.m. ET to watch the entire competition. It is not to be missed!